This was my second time speaking and attending the MobileX conference. Last year there was one event that was held in Lexington, Ky. This year the MobileX Conference has hit the road with events in Columbus, Ohio, Chicago, Ill., Nashville, Tenn., and Lexington again. You can view their whole schedule at mobilexconference.org. The MobileX Conference in Nashville had a pretty good turnout and was well received by those who attended. 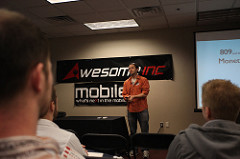 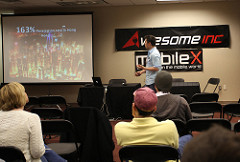 Noah Kagan, Founder of kickflip, Inc (makers of GetGambit.com), who also spent time as the CMO at Mint.com and was the original creator of Facebook Mobile, gave the opening keynote. Noah’s talk was titled “Making Money in Mobile – It’s not just the iPhone”, which was very informative and entertaining. It definitely set the mood for the rest of the event.

The conference was broken out into three separate tracks, “Entrepreneur/Investor,” “Technical,” and “Mobile Music.” There was also an “iPhone Beginner” course offered at the same time. My first talk was on the topic of “Building Native Apps Using Titanium Mobile”.

I went over Appcelerator’s Titanium Mobile platform and how you could build truly native applications for iPhone and Android just using JavaScript. I event went into detail about how we built certain elements of the iPhone version of Grub.it.

Sam Soffes from Tasteful Works had a talk titled “Reuse Your Code”, which went over how to create static libraries and bundles for your iPhone or iPad application. Nick Holland from Mobile Assassins had a great talk titled “What I Wish I Knew Before I Started a Mobile Gaming Company”. 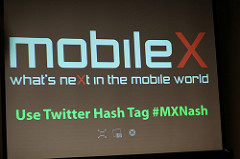 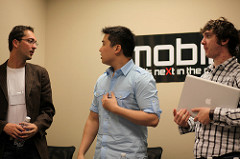 Another great thing about this conference was that there were panel sessions throughout the day. These panels allowed the audience to ask specific questions regarding a topic and get all of our opinions. I was fortunate enough to be on one panel with Jackson Miller and Sam Soffes about native applications versus the mobile web, which actually didn’t get all that heated since we were mostly on the same side. We took questions from the moderator and answered questions from the audience and I felt like it ended up being pretty informative. 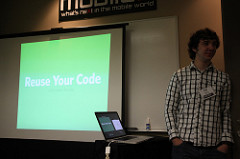 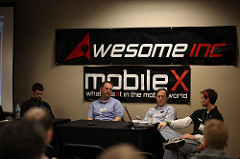 Sadly, Michael Mettler from AdCru and former Product Manager at Admob, could not make it to the event. I was asked at the last minute to do the closing keynote that I did at last year’s MobileX conference in his place. Instead of updating my talk from last year, I decided to do a whole new talk around the current state of mobile and why it is such a great time for us as developers, entrepreneurs, and investors to be in mobile right now. My closing keynote talk was titled “I’m Mobile, Who’s Coming With Me“, and I believe it went pretty well.

The MobileX Conference in Nashville was a great event. I had a great time and judging by the tweets I can tell that I wasn’t the only one. The MobileX Conference in Lexington, KY kicks off on April 16, 2010 and I’ll be there speaking again. If you’re in the area and would love to hear about great things in mobile, I highly suggest that you attend.