In a country where people can’t get internet access until college, and computers are not household items, a disciplined self-learner discovered his passion for computers and technology despite his own circumstances. In this week’s Insider, read about Senior Engineer, Xue Yong Zhi.

Yong grew up in Beijing, China where he spent most of his youth studying to get into a good college. In his free time he took joy in reading comic books like Doraemon and Dragon Ball, and dreamt of one day becoming a comic book writer. Yong didn’t have access to computers or the internet until college, and says that, “even in my generation in China, this still was early.” Studying hard in school and performing well on college admission exams afforded him the opportunity to attend one of the few colleges in China that had internet access.

Yong explains that in China, your concentration in college is determined by your entrance exams. His strong grades allowed him to study Wireless Communications, but he admits that he didn’t like it that much and with a sense of relief confesses, “thankfully, I soon discovered computers!” Yong later landed a job with a small group of hackers at NSFocus.com, which has since become a successful network security company in China.

The fact that he was able to get a job in the computer field at all was fortuitous; “We did not have many choices in China. For most people the major that you study is your career afterward.” Yong was able to break out of that convention by teaching himself everything he could about computers, programming and networking while he was in college. “I did not spend much time on my major, only enough to pass the exams. I spent most of my time teaching myself computer and internet stuff. Telnet and BBSes were the most interesting stuff at that time, and I learned about things like internet security from there.” He didn’t have any peers or teachers in his department to study with or bounce ideas off; his learning was entirely self-directed. 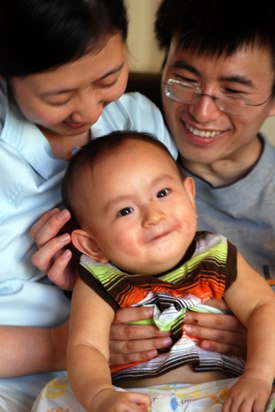 When Yong began working for NSFocus.com after college, he learned about internet security and programming at an accelerated pace. He spent most of his time working on an intrusion detection system in C & C++. “Doing things that you like is priceless,” Yong says. In a society where your future unfolds in a mostly determined and linear path, breaking out of the mold can be a difficult challenge. Yong now enjoys an unconventional life in comparison to the life he had in China. As a senior engineer at Intridea, he works and raises his son Alex from the comfort of his home in Maryland, with his wife. He came to the states several years ago to study Computer Science, and earned his Master’s degree at the University of Delaware.

Yong learned Ruby when he was rewriting a web application at a previous company. “My boss liked C, so I had to use C to write the application (a strange requirement). I wanted to write a framework to make it easier for myself. After comparing lots of frameworks I found that I liked Rails’s style the best, and I wrote a framework in C based on Rails MVC architecture. Although the project was later canceled, I was already really interested in Ruby and Rails, and taught myself the languages.” Yong can program in C, C++ Java and some other languages, but prefers Ruby over all of them; “It makes things easy for me as a programmer. I can spend more time thinking about applications, rather than reinventing wheels.”

At Intridea Yong has been working on a download manager for a large gaming client, which requires him to work on both a Windows machine and a Mac. But working on a PC isn’t a bad thing for him. In fact, he’s only been using a Mac for a year now. His history in internet security had him most often working with Linux, Unix and Windows operating systems on PCs. His favorite development tool, Source Insight is an editor for C, C++ and Java. “This tool is the best. No other tool even comes close. Few people have heard of it, and it does not support Ruby, sadly, but if I have some free time to do an open source project I will write an editor like that.” 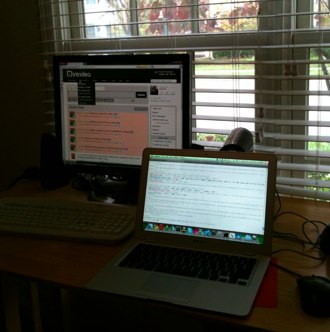 For Ruby development Yong uses Vim. In order to better understand the Ruby internals, he started writing a Ruby compiler, from the ground up over two years ago. “I gave up recently because it was just too much work to port all the libs into C extensions, and JRuby started to do similar things.” Although he has since stepped away from the project, he was able to attain an in-depth understanding of Ruby while he was trying to learn the language.

Studying, working and living in the United States has been enjoyable for Yong, but he sometimes thinks of going back to China. “My parents, and my wife’s parents live in China, and they miss their grandson very much.” One thing Yong doesn’t miss about China is the noise. He talks about how quiet it is here in the U.S. compared to Beijing; “There are people everywhere in China. You know how crowded the shopping malls get around Christmas time? In China, it is like that every single day.”

I asked Yong if he feels that people in China are at a disadvantage technologically, because they do not have the opportunity to use computers or the internet until they are at least in college. He answers, “No, I do not think so. Smart people can learn things quickly.” Yong is a bright example of that case. Being able to direct your own learning and thusly your own success is one of the common traits among all Intrideans. Yong’s story illustrates that anyone, from any part of the world, given a dose of inspiration and vision can carve out their individual path to happiness and success.