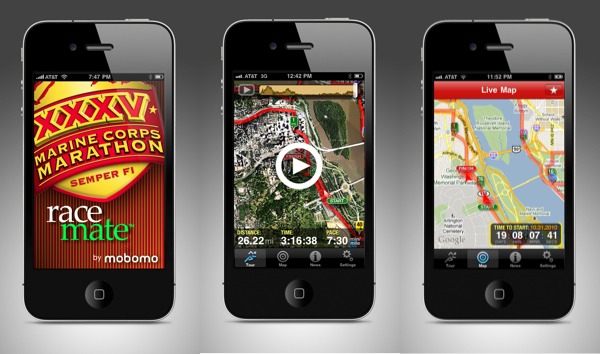 For those of you who enjoy marathon races, the Marine Corps Marathon (MCM) is one of the largest in the world. It is the eighth-largest in the world, fourth-largest in the U.S., and the largest such race with no prize money — hence it’s nickname, The People’s Marathon. Past races have had participants from as many as 50 countries. At a course length of just over 26 miles, there’s a lot for runners to prepare for and onlookers to track. Mobomo’s new, first of its kind RaceMate(tm) mobile app is exactly what you need to enhance the MCM race-day experience. The app is available for the iPhone, iPod Touch,  iPad, and Android Phone.

RaceMate is packed with features, including a countdown timer, a course map, pre-viz animation, a pace calculator and more. The embedded marathon map not only shows landmarks such as aid stations, water & food spots and mile markers but actual GPS-based locations of race participants. Track your favorite runner in real-time.

Can’t make it to the race? With an expected 30K runners and many more spectators, not everyone can or wants to be present. The Location-Based Services (LBS) mobile technology used in the RaceMate app means that you can cheer on and track your favorite runner on race day without being present. Both runners and spectators will need their smartphones; however, market research suggests nearly 85% of runners own a smart phone and that almost half of race participants will carry a smartphone will carry a smartphone during the marathon (MCM press release).

More info: The 35th Annual MCM takes place on Oct 31st, 2010, in Arlington, VA. The Marathon Tour starts Oct 20th and passes through several American cities on the way to Arlington. An associated free two-day Health and Fitness Expo starts Oct 29th and includes a Speaker Series as well as over 200 exhibitors. The marathon race itself is open to runners aged 14 and up. For more details, visit the following links:

The Android edition of RaceMate is now available at your favorite Android app marketplace.

Upcoming, Spring 2011: editions for other races in Los Angeles, London and Boston.

Need advice on how your business can leverage the mobile platform? Feel free to contact us to discuss your app idea or mobile campaign needs.