PROJECT README, Y U NO HAVE? 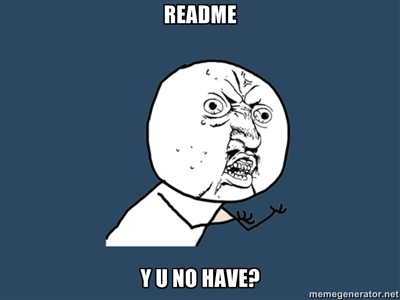 Pick any popular open source library. It’ll have more documentation than your application code – I guarantee it. Test and documentation are both acknowledged as good development practices. But unlike testing, documentation doesn’t get the same love from developers. For code that isn’t intended for a public audience, developers keep all the docs in their head, or assume that their code is self documenting. Additionally, the tests become a kind of runnable documentation. But there’s several lessons we can apply to our private application code from open source documentation. Today, we’ll start the conversation with the lowest hanging fruits – the README.

The lack of a good README is one of my major pet peeves. When starting on a new project, more often than not, I’ll find myself staring at this README:

That’s a fantastic README introduction… for the Rails framework. But it also happens to be the default scaffold README for every new Rails project. Think of a README as a first impression of your project. Just like open source projects, your README should introduce the project the new developers.

Take 5 minutes of your time to write a README that explains the following things:

A short elevator pitch about your application. Examples:

List any dependencies your project has, both libraries it depends on, as well as external services it uses. Also remember to include any commands to start required services. Example:

Usually, I like to add an additional section for developers to add tips and tricks that help with their day to day workflow. The notes listed in this section are optional and individual developers can choose to use them or not.

Often times, existing developers and stakeholders will have their environments configured and won’t remember what seed data the system assumes to exist. Versioning a gzip dump of the test data is perfect for someone to come along and get a sense of what the app data looks like.

If the project is a client project, it’s good to list the stakeholders and their roles. It’s also a good place to put down the names and contact information for members who may have worked on the project in the past.

A list of links to other sources of documentation or project management tools.

Having a good README can help you onboard developers faster and have a single starting point for your project. It’s easy and fast to write, so go forth and write yours today!