The New York Times Hack Day event this past weekend was incredible fun and a great success. We had an amazing time participating at the New York Times Science Fair last month, and were really honored to be invited back by Joe Fiore as judges for the 2012 Hack Day competition. Intridea co-founder Yoshi Maisami served as judge.

Hack Day brought together over 100 developers to build neat products that ranged from fun and whimsical to incredibly practical. The day kicked off with breakfast and an intro to the judges, from which point the developers were left to get cracking for twelve intense hours.

We enjoyed being part of the constant buzz in the room and connecting with smart developers one-on-one. It was especially great being able to walk around and help hackers figure out issues they were having with TweetStream and OmniAuth–both popular open source projects spun out by fellow Intrideans. 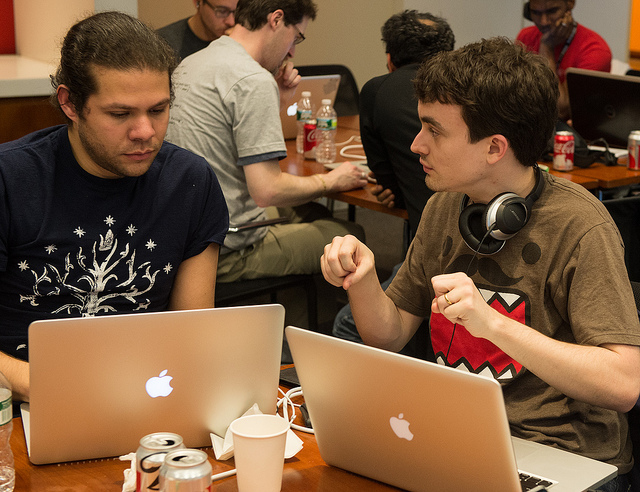 The Times also planned interesting side sessions throughout the day, which brought upon a few “aha!” moments. Intridea engineer Serign Jobe attended talks on the history and current state of meta data at the NY Times, and the Times’ article search API. Given the size of the New York Times’ content base, it was interesting to learn how the Times tackles many of the search and data challenges that have become increasingly common across large enterprises, especially as “big data” solutions become more relevant.

Perhaps our favorite moment from the event was watching Albert Sun demonstrate his “Dancing Desk” project – a fun and interactive way (to say the least) of pushing out tweets, Git commits and more. Check out the hilarious video below:

Needless to say, you’ll burn at least a few calories that way (now if only we could do all our programming by dancing around…).

Intridea judge, Yoshi, really had his work cut out for him trying to sort through the great projects and help pick a winner. By the close of the day, the Times announced the grand prize as going to NYCHere by Andrew Pinzler – congrats, Andrew!

For a more complete list of all the neat projects and runners-up winners, check out the New York Times’ wrap-up post of the event.

We plan to stay active in the developer community by attending more hackathons and in the near future hope to host one of our own. If you happen to be a hacker with some insights on the next big event, get in touch! We’d love to come out and meet you.

Until the next time, folks, keep thinking, hacking, and creating. This world (especially technology) needs every crazy one of us.