Looking Back at iPhoneDevCamp 3 at Yahoo! 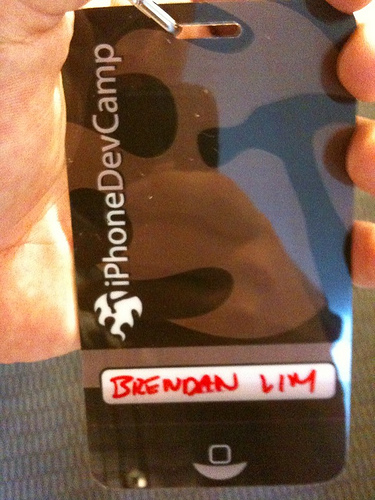 Our Director of Research & Development, Pradeep Elankumaran, and I attended iPhoneDevCamp 3 during the first week of this month. For those of you who haven’t heard of iPhoneDevCamp, it is supposed to be setup as an “unconference”, sort of a “Barcamp” type of an event, featuring content from the attendees and dedicated time for hacking on your own applications. Last year’s iPhoneDevCamp was hosted by Adobe Systems in San Francisco. This year’s iPhoneDevCamp was kindly hosted by the good guys at Yahoo! in Sunnyvale, California.

Yahoo! has an amazing campus that was more than capable of hosting the large amount of iPhone developers there for the event. There were also many “satellite” events going on in different cities around the world at the same time. One really interesting feature that they had at the event was a live stream of presenters of developers hacking away that could be viewed on any iPhone thanks to the new HTTP live streaming available in OS 3.0. 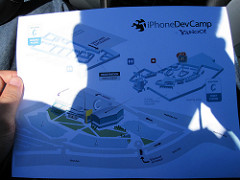 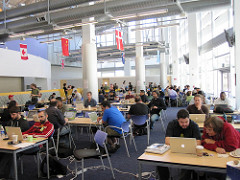 The event kicked off on the first day with a mixer, which allowed everybody to walk around and introduce themselves to other developers and vendors that were at the event. Chi-Hua Chien gave the keynote and talked about the general growth of mobile and the Kleiner Perkins iFund. After his keynote was another chance to meet others, followed by a musical performance by BT. Pradeep and I “accidentally” had a chance to walk on stage and check out BT setting up his equipment. 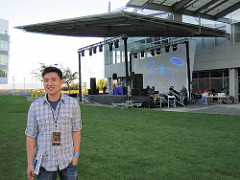 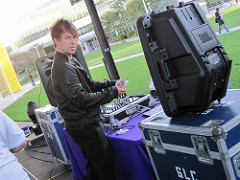 The rest of the event on the following two days consisted of teams hacking on different iPhone applications, which could be entered in to win a bunch of prizes for many different categories. Other keynotes from these days were by Andrew Stone of Twittelator fame and Steve Demeter, developer of Trism. There were also various talks held within different classrooms. Of those in attendance, the majority were experienced iPhone developers, but many others were not. People who didn’t have any Objective-C experience helped out web interfaces, graphics, etc. I’m pretty comfortable with Objective-C but Pradeep hasn’t had much experience with it at the time. For our project, which we weren’t planning on submitting at the end of the event, Pradeep worked on the Rails back end and I worked on the iPhone interface. 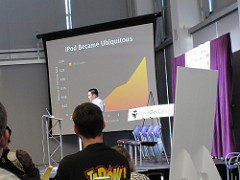 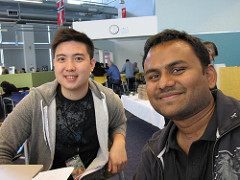 There were some really interesting applications that won awards at the event. Some of those that stood out to us were AR Kit (Best iPhone Open Source App), Nurse Brain (Highest Potential Startup Idea), and iSign (Best iPhone App for Accessibility). AR Kit is an open source augmented reality UI library for displaying location based data in spherical coordinate systems mirroring UI Kit on the phone. Nurse Brain allows nurses to hand-off important data about patients during shift change. iSign opens up people accessibility on the iPhone by introducing a gesture based sign language. There were many other great applications that received awards. 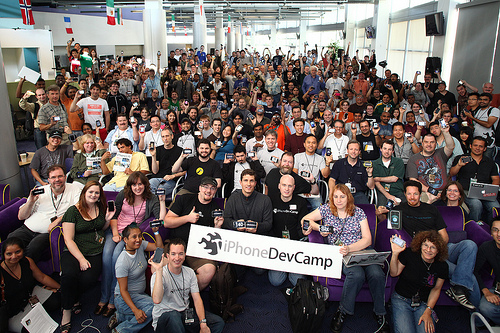 We had a great time at iPhoneDevCamp 3 and hope that we can have the chance to participate again next year. Thanks again to everyone who organized the great event, BT for performing (and not getting your security to throw us off stage), and Yahoo! for allowing the event to be hosted at a great campus. Hopefully, we’ll soon be able to reveal what we were working on at the event!