We are very excited to announce the “Intridea Insider”, a new blog series that will profile a new Intridean every week. Check in every Thursday morning to get a detailed interview with a team member, and discover everything from their favorite gems and productivity apps to their favorite coffee spots and blogs.

Like many geeks, Joe grew up liking dinosaurs and computers. It wasn’t until he met the web in 1994 though, that he had a real reason to favor one over the other. His love affair with the web started with a very simple menu option: View > Source. Being able to not only visit a website, but also see how it was put together and then tinker with it was a powerful opportunity. For Joe, this plus the combination of HTML being pretty simple to learn meant that, “Wouldn’t it be cool if I could …” was replaced by “Look at all the cool stuff I can do …”

Unlike many formally educated CS students who find themselves in software development positions, Joe took a roundabout path to his Senior Engineering position at Intridea. Joe was interested in programming since dabbling in LOGO and BASIC as a kid, but he studied Anthropology and Journalism in college, and after graduation he worked at an Advertising & PR firm. His software engineering future was instantiated in 1999 when he was able to transition to the New Media department at the firm to build websites. From there, Joe encountered endless opportunities to learn and use other technologies like CSS, JS, ColdFusion, Perl, PHP, ASP, JSP, Python, and of course, Ruby and Ruby on Rails. Before joining the Intridea team, Joe was working on one of the largest Rails applications to date, at Revolution Health in DC.

When asked if he ever feels he is at a disadvantage to formally educated web development professionals, he answers, “Well it’s a question I’ve been asked before, and I say no, for two reasons:

Being self-taught requires motivation, discipline and a love of learning and Joe certainly has all three. He reads all the time and has used bloggers as “substitute mentors” throughout the years. He looked to blogs like Joel on Software, “when it was still good” he says. “They gave me insight into what much more experienced and practiced developers were doing.” Nowadays he enjoys reading blogs like A Fresh Cup, because it gives him quick access to good information: “Mike Gunderloy does such a great job of tracking down and compiling links to cool stuff out there, saving me the trouble of doing so.”

As far as development tools are concerned, Joe is an emacs user through and through. Being able to learn all the emacs tricks from a senior developer he used to work with prompted him to adopt this as his editor of choice early on. “I’m old school,” Joe admits after explaining why he stuck with emacs even while many of his peers were swooning over TextMate. “Any editor being proprietary and tied to a single OS was a non-starter for me. And I figure emacs was here before I started programming; it’ll be here after I retire.”

Joe spends a lot of time in script/console and cites the under-appreciated Wirble as a favorite gem. His .irbrc, along with other configuration files, are available on github. “One thing I like about hacking is the ability to customize the environment to meet my own needs.”

When I asked Joe what he loves most about Ruby, he began talking about the Ruby “ecosystem.” We talked about the passion for quality code that so many Rubyists seem to share and how that creates a unique ecosystem. “Ruby seems to have a greatly disproportionate number of people who really do ‘give a shit’; their opinions can and do clash, but they have them and they care about them.” Joe identifies “The Pragmatic Programmer” as the book that inspired him to approach writing software as a craft. He says it gave him the realization “that it’s worth being great at software development, that things like quality matter, and that it’s worth investing in learning.”

Joe cites the DCRUG, an event he helps to organize, as an example of how diverse and remarkable the Ruby community is; “People come from everywhere to do presentations. They care so much about what they’re working on that they will travel to another city just to share it with other geeks.”

While Joe Grossberg sounds a lot like the quintessential Rubyist, there are some things you might be surprised to know. For example, Joe is not a testing fanatic. While he sees lots of value in testing, especially on large-scale projects with a multitude of developers, he says it’s all about the end-user. “Let’s be honest; it’s not like software was all broken and unusable before the testing/TDD/BDD meme became big.” He reasons that while testing “increases quality in multiple ways, the difference between 99% test coverage and 100% coverage is probably not what’s going to make-or-break your application.” He believes that tests are most valuable, however, when you’re working on someone else’s code; tests provide a safety net and “make legacy code less dastardly.”

Another interesting trait that distinguishes Joe from most programmers is that he is not a caffeine junkie! Instead of reaching for coffee when he gets tired and hits a lull he changes focus by going to the gym, reading blogs, or opening a book. In fact, the gym has played a big part in changing Joe’s life in the last couple of years. He has shed almost 90 lbs by diligently working out, cooking healthy meals at home (his site is the #1 result in Google if you search “how to make curry”) and getting fitness advice from sources like his favorite fitness blog, Mark’s Daily Apple.

Most Intrideans work from their home offices and are spread out across the country. But Joe lives in DC and actually prefers to work in our office. He likes having the ergonomic chair and a real desk setup with wireless keyboard and mouse, without the distractions of a coffee shop and the clean separation between work and home. He enjoys a casual, five block walk to the Intridea office; as he walks by the gridlocked traffic each day, he is reminded of how grateful he is that he’s been able to “opt out of that life.” Joe wants to work in the office, so he does. “But I also realize that’s not for everybody”, he explains. “To me, that’s one of the best parts of working at Intridea — the flexibility. None of this ‘one size fits all’ nonsense like ‘everybody pair programs all the time’.”

Joe is an insanely talented developer as a result of his determination and love of learning. At Intridea, we are pretty happy that he chose computers over dinosaurs.

When Joe is not working at the Intridea office in DC, he spends time with his wife, Salem, whom he speaks of with the highest regard. “She’s my favorite person in the history of the world. She’s brilliantly smart and she loves learning.” Joe and Salem met on the internet and were the JDate Success Story of the month recently. They also have two adorable cats, Miju and Peeps. 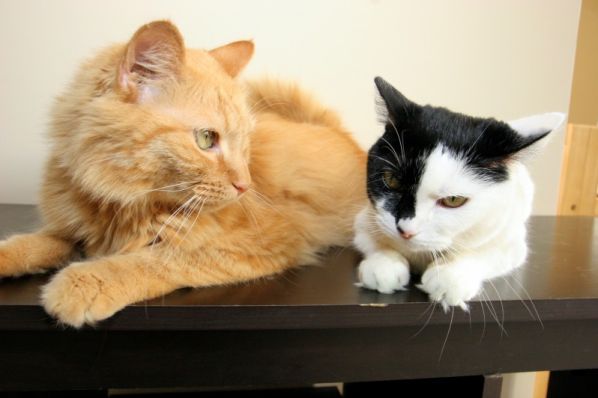