Aggregating all the little clues that various blogs have gathered about the next Apple iPhone and the iPhone OS 4 suggests that the 4th generation of this smartphone is going to be one powerful mobile device, with lots of new features.

One such feature is the integration of Facebook right into the OS, at least in terms of contact syncing. This is a “fact” that has already been discovered by a few bloggers who discovered the details by digging around in the iPhone 4 SDK. Of course, other competing smartphones, including Palm webOS phones, already offer this. However, Apple might just gain the edge on competitors, thanks to a recently-granted Apple patent for the iPhone that suggests a social version of Mac OS’ signature 3d “cover flow” method of browsing a collection of information — such as documents in a Finder window, or albums or DVDs in iTunes.

A “social cover flow” feature on the iPhone would give users a very nice visual means of quickly flipping through social media (e.g., Facebook) profiles, as the patent diagram below suggests. This alone could make it worth having the new iPhone — yet to be announced — at least for all the mobile users of Facebook — which as many as 100M at last count, not all of whom use an Apple iPhone OS-based device. 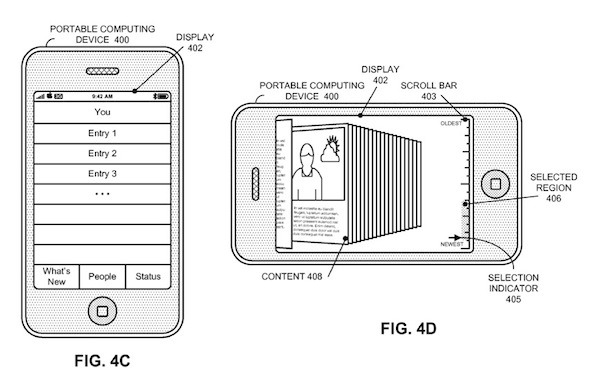 Then of course there are the rumors that the new phone will have a front-facing camera (and probably retain the back-facing camera as well), to enable video calling. And Steve Jobs already announced that 3rd-party apps would now have multi-tasking. There’s surely many more features we haven’t even heard about it.

So the 4th-gen iPhone is going to need a faster processing chip and more RAM memory. The current 128MB for the 3GS model simply won’t be enough for all the new capabilities. So it’s no surprise that the latest iPhone prototype discovered in the wild is found to have an A4 chip like the iPad and 256MB of RAM. (This is system memory, and separate from the storage capacity, which has been speculated at as high as 128GB for the top end.)