Next OLPC Not a Laptop, Not a Netbook 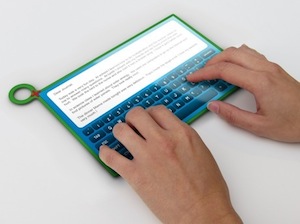 Remember the OLPC (One Laptop Per Child) campaign aimed at providing children in developing nations with affordable computing devices? It ended up costing way too much, but there’s a new, relatively inexpensive option. The next version of the campaign’s device won’t even be a laptop, it’ll be a tablet computer.

According to specs in Fortune, the XO-3 will be a 9-inch, Android-based tablet made by Marvell. It’ll have one or two cameras, Wi-Fi, and a multi-touch screen. It’ll also work with a plugin mouse and keyboard. Apparently it’ll be capable of playing HD video, too.

One of the benefits of this device is that it’ll be easier to support a variety of languages than was the case with the previous OLPC because of the physical keyboard. A virtual keyboard, on the other hand, can be switched, for example, to non-Latin characters on the fly.

The hardware is expected to cost $99 initially, but drop to $75 by 2011. Sounds pretty cheap, but at least one Asian manufacturer is planning Android-based tablet computers for $100-150, to be released by the second half of 2010.

Who knows? They might even have a similar deal as with the old OLPC, where you could buy two devices for a fairly reasonable price — by N. American standards — and one device would be given as a gift to a student in a developing country. If they manage the $75 price tag, I’m looking forward to getting a couple of these for my twin nieces — who were addicted to my iPad within minutes of trying it — as well as maybe contributing some.