Acts-as-taggable-on, subdomain-fu, tweetstream, seed-fu, oauth2, and multi_json. What do all of these open source projects have in common? Why, Michael Bleigh, of course! This week, meet our Creative Director, Michael: expert programmer, prolific designer, and open source crusader.

In his three years at Intridea, Michael has created a staggering number of open source solutions for Ruby and Ruby on Rails developers. His contributions to our community are noteworthy and it is for this reason that I start off the interview by asking him about his inspiration and passion for open source software and development. For Michael, it was simple: “I saw people doing cool things and thought, hey, I want to be like those people!”.

His first (and most popular) project was acts-as-taggable-on, “a tagging plugin for Rails applications that allows for custom tagging along dynamic contexts”. Michael says that the project came about because, “I really needed the functionality, and I was able to get it by modifying an existing plugin. I rewrote it and then I figured, well, I should release this. Instantly, I was hooked.” He has created over twenty open source projects since he started with Intridea, and cites several of them as personal favorites, such as subdomain-fu: “Lots of people were making Rails apps with subdomains and everyone seemed to be complaining about it. This one just took a lot of hard work and perseverance reading Rails internals to make it work right, and once it was done, subdomains just worked.”

Most recently, he has been working with OAuth2; “I’ve really gotten interested in these open standards, and when OAuth 2.0 came out I was happy to be able to write the first Ruby library for it.”

As our internal open source pioneer, Michael spends a lot of time focusing on creating these open source tools. But he doesn’t just create open source solutions; he also points out that he uses dozens of open source projects every day. It might sounds like a high number, but Michael explains, “Anyone who develops for Rails is using a ton of open source projects. Every gem in your Rails app is someone’s hard work, sweat and tears.” Michael contends that more developers should make time to develop or work on open source software. “I’ve always wanted to give a sort of open source cheerleader talk at one of these conferences. It’s so easy, there’s no reason everyone can’t do it.”

Michael is equally a programmer and a designer. From an early age he had a passion for both computing and gaming, as well as drawing. “I really enjoyed cartooning. I used to do dead-on Penny Arcade art style as well as a decent anime style. My freshman year of college I had a webcomic called ‘Fun With Sharpies’ that were just hastily drawn Sharpie comics.” He has even contemplated starting a weekly webcomic for Intridea.

As a designer, he laments the lack of design talent in the open source community. “Apple has a monopoly on pretty graphics with a POSIX shell (though the new Ubuntu is nice). I’d love to find a way to encourage more designers to get involved with open source and make things that cause Cupertino to be jealous instead of the other way around.” Michael admits that although he makes every attempt to use open-source software, he still uses proprietary software. Mac OS X is his primary operating system due largely to the availability of Adobe’s design tools. Michael does his best to try to bridge the gap between designers and the open source community; “I’ve created some open source projects with a UI, like my Twitter client for Google Chrome, but I’d like to do more.”

He notes a barrier to entry for open source design: “I think that coders can understand the open source process more easily. We deal with version control and team development all the time, but designers aren’t used to that. There needs to be a channel of communication and encouragement.”

A good example of Michael’s exceptional talent as both designer and developer can be seen in his RailsConf 2010 presentation, “The Present Future of OAuth”. “It’s a subject that lots of people find confusing and boring, so making the slides fun helped keep it lively and explain things in simpler terms.” He enjoyed working with simple illustrations styled after the Zero Punctuation reviews. “Embracing constraints (like block people with circles for hands and logos for heads) can be really rewarding. My favorite slide is the one where OAuth 1.0 is looking down at the ground… I feel like it conveys a dejected emotion really well; getting emotion to translate within such constraints is a fun challenge.”

Michael has given a number of presentations at conferences around the world. But, surprisingly, he’s a pretty shy and timid guy. “I’m not the most extroverted guy, I love to meet new people but I’m not always great at striking up conversations. That’s why I love speaking at conferences.” He hopes to be able to speak as early as possible at the conference so that he’ll have a “jumping off point” for conversation. Michael has always enjoyed speaking; he was a member of the debate team in high school where he grew up in Olathe, KS and participated in mock trial in college at Georgia Tech. 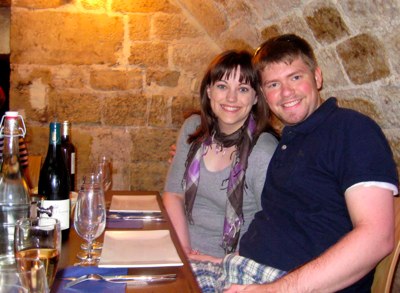 Although Michael is well known for his open source contributions, he spends most of his time working on internal products and client work at Intridea. He most enjoys working on products; “I have all these ideas in my head and it kills me not to be constantly making them a reality.” In the coming year, Michael will be leading a structured team of our internal product developers to help bring innovative ideas to fruition.

Though it may seem that he never stops working, Michael has a great life outside of the office too. He recently married his high school sweetheart. “Morgan sat next to me in a history class my junior year for reasons beyond even her understanding. I already liked her, but was too shy to say anything.” Michael was pretty surprised when she agreed to go to the movies with him for the first time. “We went to see ‘The Mothman Prophecies’. I was so inexperienced with dating that I didn’t know that I should have picked her up and that there should have been dinner involved.” But as fate would have it, she fell in love with him despite his lack of knowledge in courtship. Now he is ecstatic to be married to his “best friend”; the brilliant woman who reads manga and plays video games with him and loves zombies even more than he does. They are under contract for their first house, a loft in downtown Kansas City, and he says that one of the first things they are going to do is “get a 6’x4′ matisse-style artwork of the Left 4 Dead zombies made to hang in the new loft.” 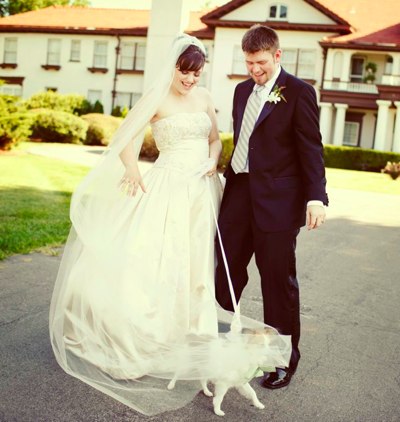 He speaks so highly of his wife that it might be hard to believe there is another woman in his life that he adores: his Pomeranian/Papillon mix dog, Zoey. “She is 10 pounds, and she acts more like a stuffed animal than a dog. She warms my feet while I code.”

Michael and his wife enjoy watching movies, especially going to the movie theater. “I will often want to go to the movies (and drag Morgan there) for its own sake, not because there’s anything out I even remotely want to see. There’s something about setting everything else aside and just experiencing someone else’s story for a few hours. Watching movies at home there are too many distractions.” He also enjoys “standup comedy and concerts in seedy bars.” His favorite artist is Ben Folds, and he has been to seven of his shows (eight in July and five with his wife). He jokes, “Ben Folds Five was my first concert ever, back in the mid ’90s. So my musical taste has really evolved.”

Maybe it’s true that his musical taste hasn’t evolved, but Michael has certainly evolved as both a designer and developer. He has made great use of his time at Intridea between his open source contributions, his product ideas and developments, and the speed and accuracy with which he can develop client projects. It’s no mistake that he so widely known and appreciated in our community. He works relentlessly to follow through on projects, and has a passion for quality and excellence that is hard to match. What can I say, we love him!