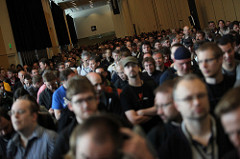 The Keynote given by Steve Jobs was set to start at 10:00am PST. I decided to arrive a little early and get there around 7:30am, thinking that being nearly three hours early would yield me some great seats. I guess I underestimated just how many people would be getting there even earlier to see Steve Jobs unveil the new iPhone and announce other goodies that have been rumored. When I arrived at Moscone West, the line was wrapped all the way around the building. There were probably close to over a thousand people already in line that had the good sense to arrive even earlier than I did. 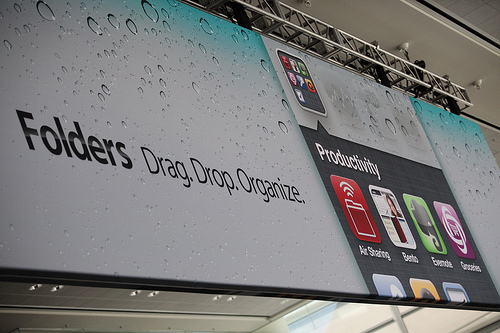 This was my first time attending WWDC and also my first time being in the presence of Steve Jobs. As the line started moving and I finally got inside the Moscone Center, I noticed all of the banners showcasing the new features of iOS 4.0, like multi-tasking and folders. I was most excited to hear all the juicy details about the new iPhone, which Gizmodo famously showed off to us a few months earlier. There were speculations about announcements of other items like iTunes.com, a new Mac Pro, a new Apple TV, and upgraded Mac Minis. Sadly, there was nothing new mentioned that wasn’t for iPhone or iPad. 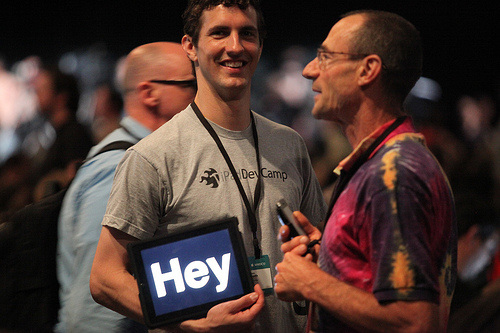 In the room where the Keynote was held, we all sat in chairs, iPads out, waiting with great anticipation for Steve Jobs to show up. When Steve finally appeared on stage we all cheered in a rush of excitement. After welcoming everybody to WWDC, he proceeded to recap on the launch of iPad and showed us a nice clip of the International launch. Then he announced some great new things, which are recapped below.

One of the first new items that he announced was notes for iBooks. You can now add notes within anything you’re reading in the iBooks application. Also, something that almost everyone wanted was the ability to view PDFs in iBooks. Steve showed off a demo of both of these features and they looked great. This update will be available later on this month. 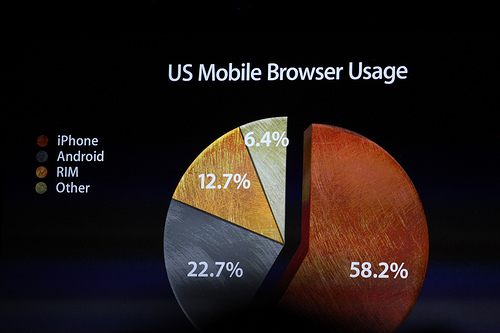 After a presentation from Netflix, who announced Netflix for iPhone, and Zynga, who announced Farmville for iPhone, Steve went on to talk about the current smartphone market share. Nielson released a new study and found that the iPhone is still leading with 35% and Android is trailing with only 9%. Steve also showed off some stats revealing that iPhone is also number one in mobile browser usage with 58.2% and Android at 22.7%. He went on to talk about how Apple re-invented the phone in 2007, and referenced a quote he made that year: “in 2010 we’re going to take the biggest leap since the original iPhone.” And with that opening, Steve announced iPhone 4 with over 100 new features. Obviously referencing the Gizmodo leak, Steve said, “I don’t know if you’ve ever seen this”, which elicited huge cheers from the audience. 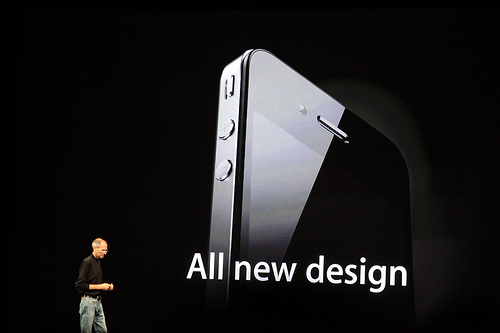 The new iPhone is definitely gorgeous. It’s glass on the front and back, and steel around the sides. It’s a nice departure from the older designs while still being something that feels like it should be called an iPhone. iPhone 4 is also very thin, exactly 24% thinner when compared to the iPhone 3GS. It also has the front-facing camera. Steve claims it’s the thinnest smartphone on the planet with a thickness of 9.3mm. When Gizmodo got their hands on the prototype iPhone there was a lot of talk about the seams along the side of the device. People argued that this wasn’t really something Apple would do. Steve went on to explain that these seams or lines around the steel band are actually part of the antenna system, which should hopefully help us out with our reception. 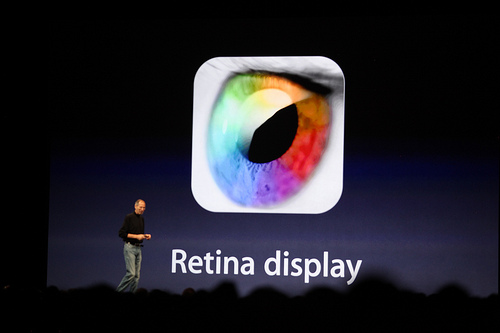 The next item that they announced was the Retina display. They’ve increased the pixel density in this new display by four times. The new display has 326 pixels per inch, which is the highest pixel density of any phone on the market. Steve then showed off comparisons between the traditional display on the iPhone and the new Retina display. It’s so clear that you basically cannot see any pixels at all. The specs on the new display is an 800:1 contrast ratio (4x better than the 3GS) and a 960×640 display using IPS technology. 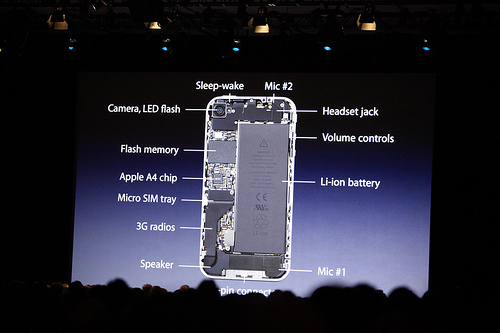 iPhone 4 also has a new A4 chip, designed by their own team. They’ve also increased the size of the battery and are now using a Micro SIM versus a traditional SIM. There is up to 32GB of storage, quad-band HSDPA, dual mic noise suppression, and 802.11n WiFi. With the A4 chip and the bigger battery, battery life has definitely increased. Also announced was a new gyroscope, which is being added to iPhone 4. It’s a 3-axis gyro which should give game developers much more accuracy when dealing with motion. This will translate into much more immersive and realistic game controls when combined with the existing accelerometer and compass. 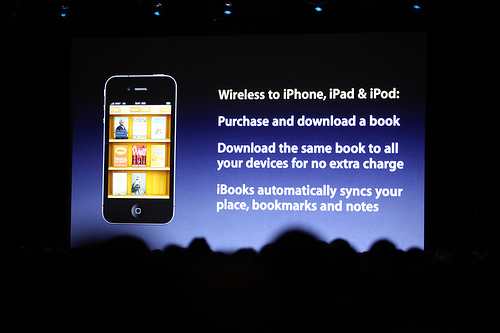 Another big announcement was that iPhone OS has been renamed to iOS. After proceeding to going through most of the new iOS changes that we all knew about, Steve announced that iBooks would be coming to the iPhone along with the PDF and notes support that was announced for the iPad earlier. Along with this, iPhone users get the iBook Store. It was great to hear that we can download the same books to all of our devices for no extra charge. A great new feature as well is that iBooks automatically syncs your place, bookmarks, and notes. 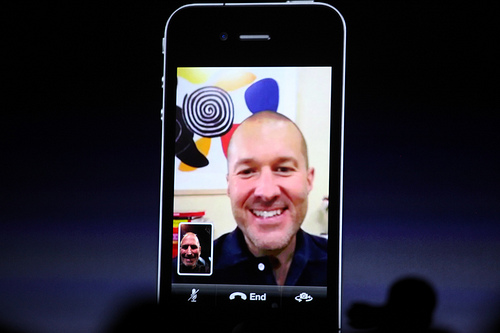 After going through some iAd examples, Steve did his famous One more thing…. In 2007, when they launched the iPhone, Steve called Jonathan Ive to demonstrate the phone. This time, Steve did the exact same thing but demonstrated a video call. It worked great on stage and everybody was excited to see it in action. You can switch from the front to the back camera by just pressing one button. The feature is called FaceTime and you can only use it on WiFi when you and the party you’re calling are both on iPhone 4. There is no setup needed. We were then presented with a commercial exemplifying how people would use FaceTime. The whole crowd nearly choked up when they saw the two people speaking in sign language on the phone. 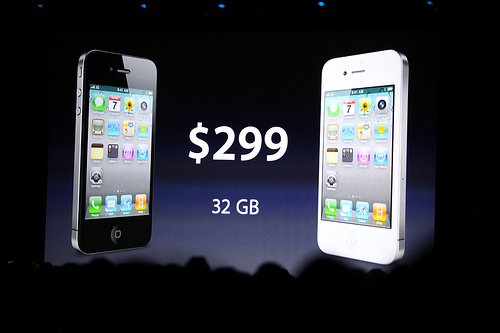 Steve mentioned that there would be two colors, white and black. The pricing will be $199 for 16GB and $299 for 32GB. AT&T is allowing upgrade eligibility up to 6 months early. iPhone 4 will be released in the US, France, Germany, UK, and Japan on June 24. We then saw a video about how the iPhone 4 was made with commentary from the usual guys at Apple. After this, Steve thanked everybody who made this possible and ended the Keynote. 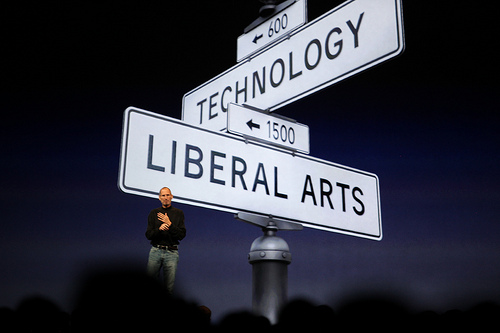 I thought I’d be disappointed that nothing else was announced, but I wasn’t. There were no other hardware upgrades, cloud-based iTunes, no new Apple TV, etc. Clearly, iPhone and iOS was the focus of this year’s WWDC and Apple seems to have done an amazing job the new iPhone. I’m excited to see how FaceTime ends up changing the way the world communicates with their mobile phones. People will say that this has been around for a while, but Apple is going to be putting it in the hands of millions and making it easy enough for anybody to use. Overall, I had a great time at my first WWDC Keynote. Hopefully, I’ll be able to come see Steve speak again and announce a new product in only a way that he can.