In the first post in this series, I talked about some of the challenges that we faced trying to implement Scrum on one of our large client projects. After failing to reap the benefits from Scrum, I designed a new process that was better suited to our project and our team. Thus Intridea Forge was born.

On the weekends, I help out at a local non-profit educational dairy farm doing blacksmithing. In the blacksmith’s workshop, you start with raw materials and put them in the forge to heat up. The forge heats up the metal to the point where it’s soft enough to be worked with tools like hammers and anvils.

This new process serves as a forge for ideas about the product. We use the process to take the ideas from cold, bare metal to a point where they are hot and maleable for the developers to work them into a finished product.

Intridea Forge in 200 words or less

In case you don’t care about some of the details, here’s the tl;dr version of Forge.

Feature ownership is the result of starting each iteration with a single developer being assigned to a single feature, even if it’s huge and complex. As developers finish the easier features, they roll over and help on the bigger ones or work on code improvement.

The finisher is a role on each iteration filled by a single developer who is not tied to a specific feature. Instead they are dedicated to fixing bugs, code improvement, and reduction of technical debt (or any other task that makes it more of a finished product). The developer assigned to this role changes every iteration.

Since a picture is worth a thousand words, here’s a graphical overview of how an iteration progresses. 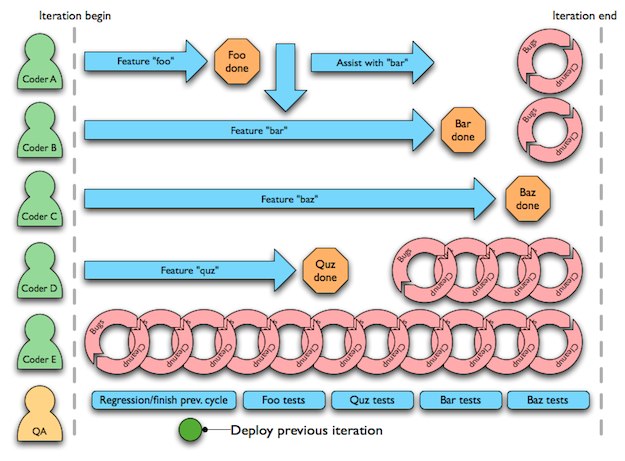 During the iteration, the management team has a responsibility to be setting up the next iteration for the team. This is handled by several important meetings. 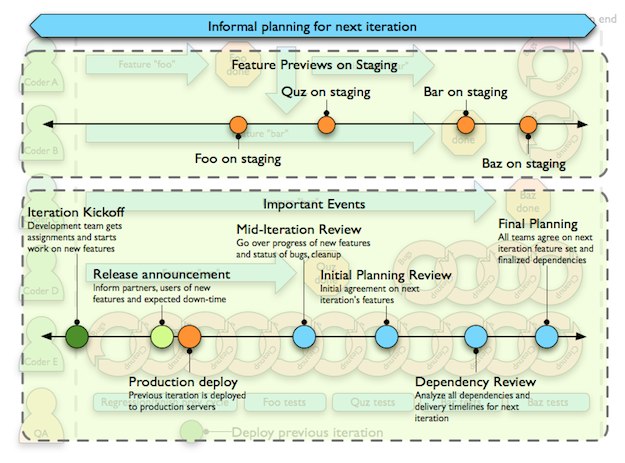 Throughout the iteration, informal planning should be happening to lay out upcoming iterations. As the iteration progresses the management team will also be able to see previews of some of the new features as they are made available for testing on staging. This helps ensure that the capability is implemented as intended and satisfies the curiosity of the management team to see what is being built.

This post has given you an overview of Intridea Forge. In the final post in the series, we’ll tell you about why it has worked well for our team and we’ll share some of the challenges that we faced implementing it. We’ll also give some tips and lessons learned about how to implement it on other projects.