After connecting with NASDAQ social media rock star Jill Dodge at a Nonprofit + Technology Tweetup in Washington DC, I received an invitation to be on a panel discussing trends in new media, part of a half day event called the Social Media Leadership Forum, hosted by NASDAQ at its famous Market site in Times Square. Included in this invite was a Willy Wonka-esque golden ticket opportunity: take part in a closing bell ceremony, where child-like groups of adults clap and cheer with glee as the market closes, fueled it would seem by an endless river of chocolate (coffee actually). 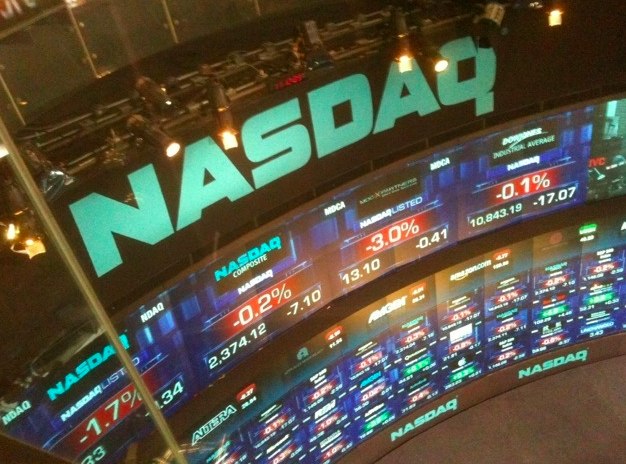 Our day at NASDAQ began in the ‘fishbowl’, an area above the indoor electronic board buzzing with reporters from CNBC, FOX Business, and other news outlets. It’s an electric place to hang out, for me especially, someone enamored by scrolling stock symbols and the symbolic center of technology since my days covering business news for a radio network during the tech bubble of the late 90s. 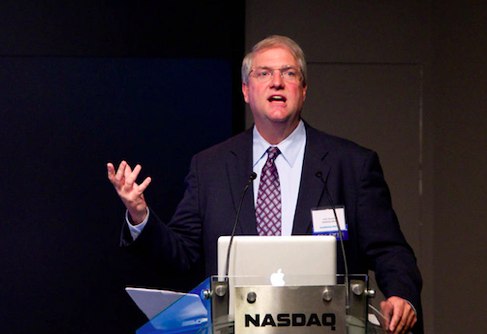 NASDAQ OMX Chief Marketing Officer and event emcee John Jacobs kicked the forum off with opening remarks, then handed the baton to David Fischer, VP of Advertising and Global Operations for Facebook. Fisher moderated a panel of senior executives from JP Morgan Chase, Proctor and Gamble, and Adidas. Their discussion, ‘Building Your Brand Around People’, was followed by social media case studies from Cisco’s Head of Social Media Marketing (thank you Jeanette, for the tour of Telepresence at your NY HQ the next day … it was mind blowing), and Microsoft’s Director of Emerging Media. 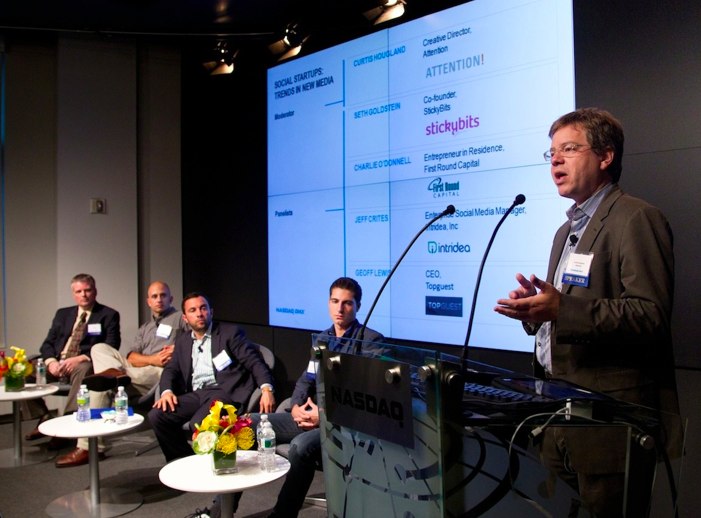 It’s tough to follow such an esteemed group of thought leaders, but next on the agenda was the panel I was part of, called ‘Social Startups: Trends in New Media’. Curtis Hougland, founder of the PR/Marketing shop Attention moderated, while I took hot seats with StickyBits co-founder Seth Goldstein, First Round Capital’s Charlie O’Donnell, and Geoff Lewis, CEO of Topguest. Our discussion ranged from geolocation, to the mobile space, to the direction of the social web in general, and the trends brands need to be most aware of. 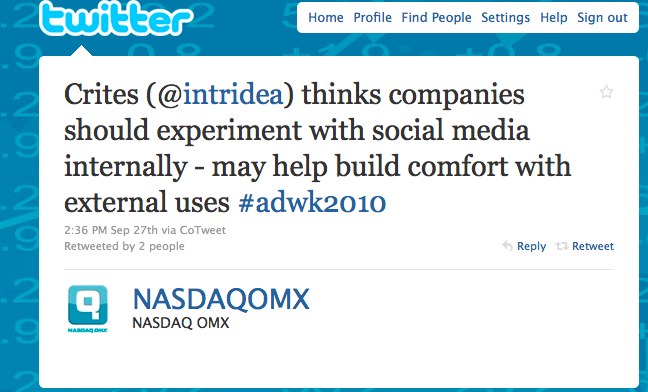 An audience member asked what advice we had for brands new to the social space, or dipping their toes nervously in social waters. I took the opportunity to encourage companies to weave ‘social’ throughout their entire fabric, to not just think of social media as external marketing and customer service channels, but to embrace internal social software and strategy as well, for transparent collaboration, problem solving, and idea sharing. Since Intridea offers Present.ly, our Enterprise microblogging tool, this is an area of personal passion and focus, and also of great interest to a growng number of brands as the Enterprise 2.0 space continues its rapid acension in 2010.

After a talk by Huffington Post CEO Eric Hippeau, John Jacobs closed out the afternoon of events and we were ushered into the NASDAQ electronic board room, where we mingled, and were given very specific instructions for the closing bell ceremony. It’s an extremely interesting event, occurring twice daily (opening/closing), and it was fascinating to get a behind-the-scenes perspective. The entire closing bell ceremony lasted about 45 minutes, from a reception to a special presentation given to the Executive Director of Advertising Week, Matt Scheckner, to numerous group photos and then the big countdown to 4pm ET. 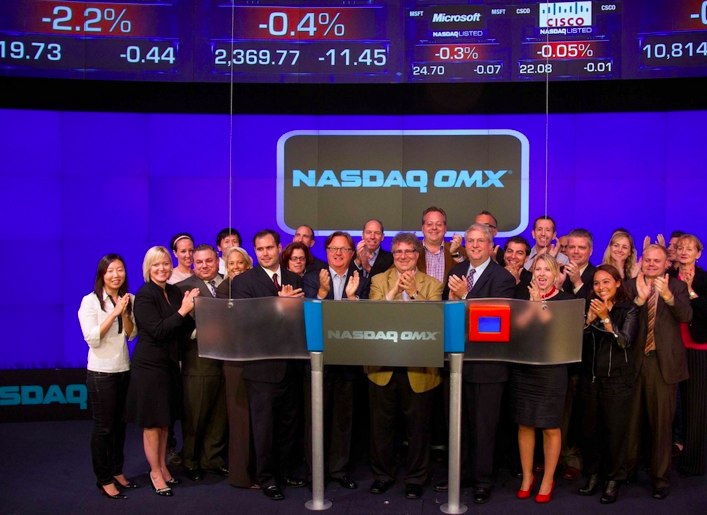 NASDAQ invited everyone associated with the Social Media Leadership Forum to take part in the ceremony, and Yoshi and I were only too happy to participate. Note Yoshi’s strategic positioning just to the left of NASDAQ CMO John Jacobs. We clapped and yelled and smiled for about 90 seconds, til our hands and faces hurt.

The icing on the cake took place a little after 4pm, after the closing bell ceremony, when NASDAQ officials walked all of us outside, to the middle of the a pedestrian zone in bustling Times Square. After more group photos, they took individual shots of company/organization representatives. And to our complete surprise, reflecting the kind of coordination involved with these daily ceremonies, they scrolled NASDAQ Welcomes Intridea Inc across the massive outdoor NASDAQ billboard/tower in the background as they took our picture. It was a glorious 30 second send-off from our new friends at NASDAQ. And if one can dream, and dream IPO big, then perhaps we’ll see the Intridea brand spotlighted once again on the NASDAQ tower. 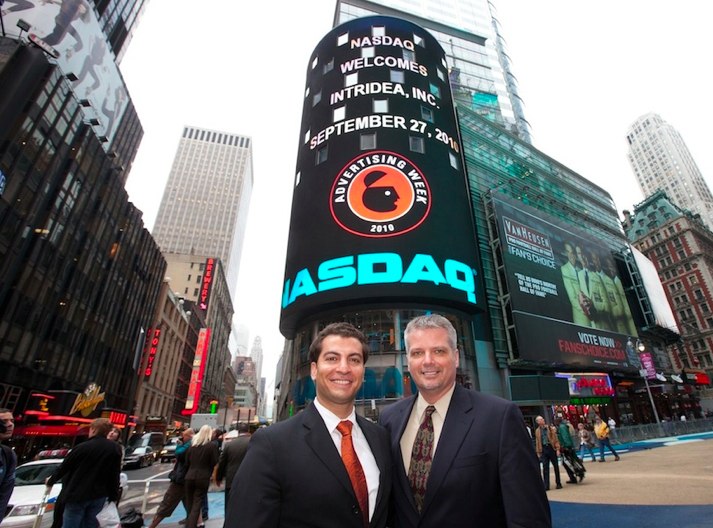