Verizon and AT&T to Carry Apple iPad: What It Means 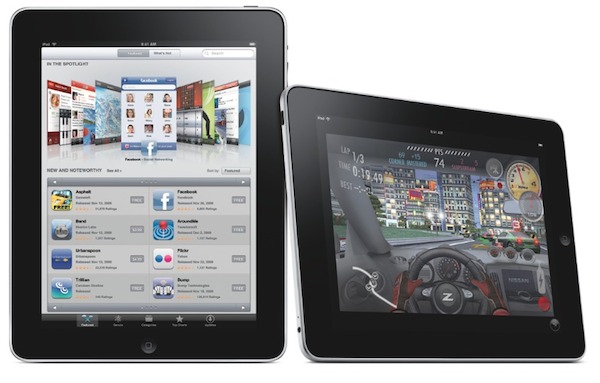 So, you thought that AT&T already sold the Apple iPad, did you? You can’t be faulted for that, considering that the 3G models of the popular mobile media tablet uses an optional AT&T data plan. However, AT&T will not actually be selling iPads until Oct 28th — the same day that their wireless competitor Verizon will be selling the iPad as well. Thrown into the mix, Wal-mart will join the list of retailers selling the device, which includes the recent addition of Best Buy this past summer.

But forget the retailers; it’s the resulting competition between AT&T and Verizon that will be interesting to watch. How will they compete each other? They can’t reduce the device price, since Apple has that fixed — no discounts, unless they themselves offer it. So obviously, the differentiation between carriers will be data plans and connection options, though one or both might decide to throw in goodies such as special cables. Except that AT&T has one advantage, as discussed in the next section.

Overall, there are six models of the iPad. One variable is memory size (16GB, 32GB and 64GB), and the other is a choice between a WiFi-only model and WiFi+3G model. AT&T will be offering all six models of iPad, since the 3G network used belongs to them. Verizon will be offering the three WiFi-only models, but to entice consumers over, they’re also offering a Internet connection bundle for each of the three models, the details of which are below.

With the AT&T offerings, if you need to be connected to the Internet regularly, you’d probably want one of the WiFi+3G models. If a wireless network connection suffices, then a WiFi-only model will probably do, and is cheaper besides. For Verizon, you have a choice of just a WiFi-only iPad, or getting a bundle that includes a MiFi 2220 mobile hotspot device. Normally, a hotspot device might be awkward to carry around, though MiFi 2200 is said to be quite small and pocketable. What’s more, the MiFi 2200 lets you connect up to five devices to the Internet.

There are other options. Myself, I use a different Verizon option, based on what was available when I got my iPad (on its launch day in April 2010). I have a Palm Pre Plus smartphone that has an embedded mobile hotspot feature, which is free of charge and lets me connect up to five devices to the Internet. The only drawback is that if I’m on the go and am not carrying a car charger (or my iPad or iPhone is already plugged into the car charging socket) or don’t have an AC outlet to charge from, then the Pre’s battery burns out extremely fast while the mobile hotspot feature is enabled. I’ve never kept an accurate time, but it feels like about an hour before the battery is dead, whether I’m using the Internet connection or not. I’m not mistaken, I’m paying $40/month for the data plan (5GB) and $40/month for the cell phone minutes — which I never use. My understanding is that Verizon also has Android phones that have mobile hotspots, if you don’t want a Palm Pre Plus.

In retrospect, had the iPad 3G been available on launch day, I would probably have purchased that. It’s much more convenient than carrying my Palm Pre Plus and its charger around (as I already carry my iPhone and sometimes my iPod Touch as well). However, for those consumer who don’t want to use AT&T, it’s important to note that Verizon currently has the more cost-effective data plans:

So Verizon’s data plans are much cheaper on a per-GB average. Normally, Verizon charges $299 for a MiFi device costs $299 or significantly less if you sign a new 2-year contract, but they’ve dropped the cost to $130 and dropped data plan rates for their iPad bundles. Their data plans are month to month, but you cannot buy an iPad “now” then go back later for a MiFi 2200 and expect the bundle rates. AT&T’s data plan also does not require a contract, but the three 3G models do cost $130 more than their WiFi-only counterparts.

Which Carrier Should You Choose?

Confused yet? It’s a bit difficult to recommend a carrier here. I use both AT&T and Verizon, but I am a mobile apps developer, so my needs are different than for most iPad users. It really depends on how you would use your iPad and whether you need to connect other devices. A 3G model is more convenient but binds you to AT&T. Verizon’s iPad bundles let you connect multiple devices, but battery power would likely be less than the iPad’s relatively long battery life, even in use. (Note: Apple’s Verizon press release says the MiFi 2200 “provides up to four hours of active use and 40 hours of standby time on a single charge.”)

For businesses that plan to have employees use the device for internal corporate use, WiFi-only models might suffice if a wireless network is always available. If an employee is will be “out in the field,” then it’s up to either cost, convenience, connection needs or carrier preference. (Don’t forget AT&T’s domestic network of 23,000+ free WiFi hotspots.) The same reasoning applies to individuals considering purchasing an iPad.

What This Means for the Future

Now of course the fact that Verizon will carry the iPad is refueling rumors that a Verizon iPhone is coming in 2011, and if that’s true, I wouldn’t be surprised if they offer Internet tethering, even if AT&T will not. What do I think? Well, it seems to me that Apple is starting a new, open relationship with Verizon and that that will very likely lead to other joint offerings. In other words, a Verizon iPhone will eventually come, once Apple is happy with Verizon’s cellular network. Apple needs to diversify U.S. cellular provider coverage and cannot afford to lose more ground in the U.S. to Android phones.

Whichever carrier iPad buyers go with starting Oct 28th, the percentage of American adults owning media tablet devices is going to climb from the Pew Internet’s current estimate of ~4%, and iPad sales will be a significant part of that. Gartner, Inc., feels that, worldwide, nearly 20 million units of media tablets (aka slates) will be sold in 2010, nearly 55M units in 2011, and over 208M units worldwide in 2014. Gene Munster, an analyst at Piper Jaffray, recently predicted that iPads alone would sell 21M units in 2011 — nearly half of Gartner’s total for all types of media tablets — a number that’s up from his initial estimate of 14.5M iPad units worldwide.

The net result of this is that mini notebook sales will suffer. If that means consumers start to use the iPads or other media tablets more often, there will be an increased demand for touch-based tablet software. This is supported by the prediction that larger media tablet devices will have an important role in the enterprise. In fact, AT&T plans to sell iPads directly to the enterprise. Once a multitasking version of Apple’s iOS mobile OS is available for the iPad — which will allow users to run several apps simultaneously, the device will have significantly more value in the enterprise.

Need advice on an iPad strategy for your business? Just want to know how you can leverage the mobile platform in general? Feel free to contact us to discuss your app idea or mobile campaign needs.