After a long winter break the Intridea Insider is back! We’re kicking off the new edition with Hao Liu: a devoted open source contributor, Linux user, soccer player, and an integral member of the Intridea East team!

Hao grew up in Qingdao, a metropolitan seaside city situated in the Shandong Province of China. He is currently living in Qingdao again after spending several years in Beijing working for Red Hat and Oak Pacific, where he applied his computer science education and initiated his open-source devotion.

While at Red Hat, Hao tested open source software including Firefox, Thunderbird and xChat. It was during this period of his life that he became affected by the open source movement and has since dedicated much of his free time to working on open source projects. The first programming language he learned was Pascal when he entered the CS program at Qingdao University. He learned several languages throughout his undergraduate and graduate experience at Northeastern University in China, but he didn’t learn about Ruby until late 2007 from a classmate.

In 2008 he taught himself Ruby with the aid of online resources like blogs and podcasts, and eventually he decided to take it from a hobby to a full-time job. That’s when he left Red Hat where he had been working in C/C++ and went to Oak Pacific, the company that created RenRen.com, China’s version of Facebook. 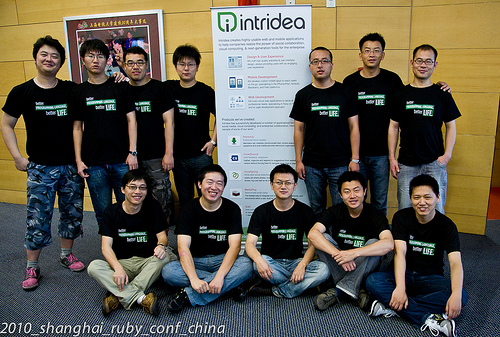 Hao fell in love with Ruby for its elegance, as most Rubyists do, and when he was offered a job with Intridea he saw the chance to both work with the language he loved and to move back home to Qingdao to be close to his family and friends. During the last year he has worked on various Ruby and Rails projects at Intridea and he continues to contribute to open source software as time permits. He’s had the opportunity to work with most of the team at Intridea, and we all love him. Ted, one of our designers who worked with Hao on a recent project remarks, “He was able to adapt my designs and help me to understand the structure and reasoning of the app itself.” Last year the Intridea East team met up at Ruby Conf China in Shanghai and Hao met all of his fellow teammates; “It was great to meet them in person, because none of them live close to me. But we don’t look that pretty in the picture,” he jokes.

Unlike many of Intridea’s developers that work on shiny Macbooks, Hao prefers to work on a linux box running Ubuntu Dekstop 10.10 where he codes in Vim. His list of can’t-live-without dev-tools include Git and Firebug.

Hao wasn’t always a programmer. In fact, he didn’t have internet access until he got to college. “Not having internet was a big reason I never knew anything about programming until I got to college. The internet really changed my life. Now, anyone can have internet at home if they can afford it. But back then, it was extremely rare to have it at home.” He spent most of his youth studying in order to get the grades that would allow him entry into a Chinese university. He chose to study Computer Science because, “I didn’t have a specific preference for any subject. But I had a computer in my bedroom and I loved it; so I decided to learn how to program.”

Looking back, Hao has some regrets about how he spent his childhood: “Growing up in China is like living someone else’s life.” He goes on to explain, “I never really thought about what I wanted. I just accepted what I was told. You are taught that the only path to happiness is to spend your life studying – to be able to go to college – to be able to get a good job. Now I have discovered that there are other ways I could have led a happy life. My happiness derives from sources like my family and my friends, not just studying and working. Those are the most precious things to me.”

He never had a lot of time for hobbies as a kid, but he does have fond memories of playing video games in the local arcades. “I remember being in the crowded arcades, full of smokers and punks.” He always loved soccer and now that he’s living back in his home city he spends every weekend playing soccer with friends. He lives with his wife, Haimei Wu who is pursuing her dream of being an entrepreneur.

Most of the Intridea team works remotely, and Hao, like many of us, was drawn to Intridea for that very reason. It affords him the ability to work with the language that he prefers and to choose for himself where he wants to live and work. The result? A happy programmer. And we’re down with that.