She does it all: project management, programming, design, has created a successful startup, has run Ignite events on both sides of the coast, and she can cook up a mean braised pork belly. She’s Intridea’s Interaction Designer, Project Manager and more. In this week’s Insider meet Patti Chan!

Anyone that has studied Psychology, Business and Graphic Design is bound to be an intriguing character. But it’s not just the time she spent at Johns Hopkins and MICA that make Patti who she is today. Her career path began when she was a young teenager growing up in Allentown, Pennsylvania when she was asked to design a set of kids’ program brochures for the Allentown Art Museum. “I got to design these tri-folds where Arty the Turtle led kids through various exhibits. I got to spend a lot of time at that museum. It’s a small town but we somehow had an original Frank Lloyd Wright installation and an original Roy Lichtenstein. I loved the simplicity and how modern both pieces were. Seeing those for the first time got me hooked on design.”

She was also a gaming nerd, and admittedly a Disney nerd too, which helped to solidify her future as a designer and developer: “I copied a lot of pop art, like characters from Nintendo Power and Disney. We got dial-up pretty early on, so eventually I found a copy of Flash. I thought I could make the next big Disney film with my drawings and Flash!” Although she didn’t debut as a Disney filmmaker (a tough feat for any 14 year old), she did spend a lot of time playing with Flash. “Those swf’s had to go somewhere, so I got a free Geocities account and taught myself HTML, CSS and JavaScript. And so it began.” 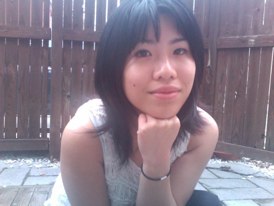 You wouldn’t know it from working with her, but she insists that design took her a while to get “good” at. “Coding always came naturally. I think I always had a good idea for how things should look, but mastering Photoshop to get that vision out took a long time. But I decided early on that I wanted to be good at design. I was ready to work for it, study hard in school, put in extra hours, do free projects, etc. So getting comfortable with it was just a product of hard work.”

Patti got into Rails development through ColdFusion. She was moved onto development projects at her first job once they saw that she had basic programming skills and that was when she picked up ColdFusion server-side programming from her colleagues. “Later, when I was ‘advanced’ I stumbled onto MVC and tried to fit it onto my CF code. But Rails was a load off. It already was MVC!”

Eventually, Patti left that company to do her own startup, 600block. She used that opportunity to dive into Rails development. “It changed my job and my future because it made me a much better programmer, almost overnight.” So what is 600block? “It’s the largest collection of daily specials (happy hours, half-off steak nights, margarita Mondays) based in Baltimore, by and for locals.” While she was developing the startup she was also busy freelancing and teaching on the side. She started at Intridea by helping out on various projects like HowAboutWe and Grub.it when she had time. 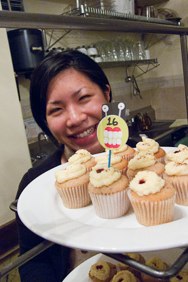 Now that she’s been at Intridea full-time for over a year, Patti has her hands in a lot of different projects and she plays several different roles, sometimes all at once. But she’s accustomed to switching roles frequently: “It’s not always easy to switch between roles, but I’ve gotten good at chunking my time. Project management is about staying organized. Code fixes are fairly easy for me to squeeze in anytime, but I like to set aside a big block of hours whenever I’m working on UI. That’s a different brain space for me.”

Currently, she’s on three projects including DealPop from White Pages, which she names as her favorite client to date. “Aside from PM, I’m the lead UI/UX for DealPop so I did the original design and graphics. I jump in for Rails work and smaller features, and do tweaking before each release.” She’s doing more UI design for a large financial corporation as well as project management for a new client involved in business consulting services. “The thing that I love about this, is that in one week I get to learn about daily deals, fighter planes, and hedge funds. In-depth!”

Patti lives in the Castro neighborhood of San Francisco, a place she describes as “lively, pretty and safe.” She recently gave up her car and walks everywhere. She likes to spend time cooking and eating out, playing Dominion, browsing the library, and catching up on Hulu and Netflix. A voracious foodie, she has her thumb on all the new restaurants in the area, and she can even whip up a variety of her own specialities including some of her favorite requests: cantonese congee (with salted pork and thousand-year-old duck eggs), BBQ, and garlic eggplant. In fact, the first thing Patti wanted to tell me about during our interview was the Iron Cupcake throw-down challenge she participated in, a monthly Big Event in SF. 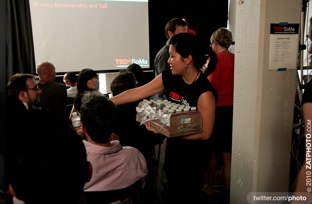 Patti also co-organizes and hosts Ignite SF four times a year (an event she describes as “TED on speed”). “After starting Ignite Baltimore with Mike Subelsky (another fantastic Rails guy who taught me a ton), I was fortunate enough to get involved in Ignite Bay area after moving to CA.” She explains, “Ignite is a series of lightning talks. We get 16 passionate speakers up on stage at a cool venue to talk about whatever excites them for 5 minutes. They get 20 slides, and each slide automatically advances after 15 seconds. It’s a high-energy format and a lot of fun. Ignites are held all over the world, and each city’s event has its own personality. Our last one sold out to an awesome crowd of 450+, and our next one is in May”. Patti also recently volunteered at TEDxSoMa, an event that was created, in part, to ‘inspire collaboration and community.'”

Not one to enjoy working alone for long periods of time, Patti discovered the joys of coworking a few years ago and now works out of pariSoma, an “Innovation loft” in the SoMa district of San Francisco. “It gives me the best of both worlds: an office environment with lunch buddies, with the freedom of working remotely and managing my own schedule. I get to be part of two ‘company cultures’ — Intridea and pariSoma, and they complement each other nicely.” 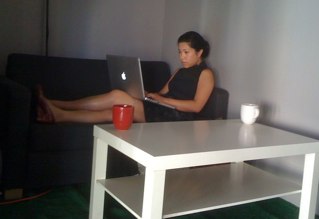 While she’s working from her spot in the loft she’s listening to Pandora “all day long” and drinking “lots of tea.” Her current Pandora stations include Adele, Miike Snow, Florence + the Machine, Bon Iver, Lyyke Li and MGMT. To the left is a photo of Patti working on one of the couches at pariSoma.

She’s a long way away from her Arty the Turtle artwork and her early sites on Geocities’ Sunset Strip. Patti is an icon of the modern female innovator – bright, agile, avant-garde and polymathic. She’s someone that you want to be around because she exudes vitality and ingenuity. And of course, we couldn’t be more lucky that she calls herself an Intridean.