This article focuses on the correlation of UX and brand equity to quantitative measures that we see in market value.

User experience (UX) is a catch-all term that we use in the software industry to describe the overall feeling an end-user gets when using a product. The UX is the attitude that is triggered when using (and subsequently thinking about) a company and their products and services. Since your user’s attitude affects their future behavior toward your brand or product, a good user experience is vital to product adoption, engagement and loyalty.

We all enjoy using a product that has been well-designed. But does the design of a product have any impact on stock prices? If it does, would that encourage Product Managers to allocate more resources to UX?

In a 2004 study on “The Impact of Design on Stock Market Performance”, the Design Council identified 63 companies to be effective users of design and analyzed the performance of them with the other UK FTSE quoted companies over a ten year period. They reported:

The key finding of the study is that a group of 63 companies identified to be effective users of design outperformed the FTSE 100 index over the full period by 200%, and also beat their peers in the recent bull and bear markets.

A number of prior studies have been undertaken around the world but all have been limited in their methodology or scale (see Appendix 1). We believe that this study offers the first conclusive evidence for the relationship between the effective use of design by corporates and an improved share price performance and therefore greater shareholder returns.

In 2006, a design group put together the UX Fund, an experiment to test whether companies that provide good UX see it reflected in their stock prices. They invested close to $50k in companies that had a history of innovation, had loyal customers, and that took care in designing their websites, products and user experience. The results? A year later the UX Fund matured a whopping 39.3% and the companies they invested in often outperformed their closest competitors.

Despite the (small, but increasing) research linking good design to stock values and despite the vital role UX plays in brand adoption and loyalty, investors and key decision makers of publicly traded companies rarely take UX into account when determining what drives their brand’s market value. While a company’s stock price is affected by an infinite number of forces, value can be closely related to the overall experience their users and customers derive.

We can spot trends and wild fluctuations in performance between companies that exist in the same market and create similar products but have widely differing approaches to UX/UI. Apple and Microsoft are a perfect (if not entirely overused) example. Apple’s users (and even many of Apple’s critics) tout that Apple products are better designed and engineered than Microsoft’s counterparts. If you have watched Objectified you know how serious Apple considers the user experience when designing a product. Apple users prefer the way they feel (and look) when using Apple products. The innovative simplicity of the UI creates a satisfying user experience.

Steve Jobs took design more seriously than most of his contemporaries, and saw it as much more than just the final layer over a product:

In most people’s vocabularies, design means veneer. It’s interior decorating. It’s the fabric of the curtains of the sofa. But to me, nothing could be further from the meaning of design. Design is the fundamental soul of a human-made creation that ends up expressing itself in successive outer layers of the product or service. Steve Jobs

The subjective divide in UX between Apple and Microsoft brands can be quantitatively measured in market value; Microsoft’s stock has remained nearly stagnant over the past 10 years, fluctuating between $20-40 per share (despite new product releases and acquisitions), while Apple’s has grown over 3000%.

Myspace is an example of how bad UX can lead to major losses. In a recent UX Magazine article, “Myspace’s UX-Induced Death”, the author discusses all the ways in which Myspace failed to engage and ultimately retain their users. Many of Myspace’s users were initially pleased with the unique customization features of the app, but it was that level of customization that eventually led Myspace to the grave. As Myspace’s users grew up and as other companies created the future of usability, Myspace stayed the same. Many of Myspace’s users desperately wanted the service to succeed and lingered, hopeful for years that the company would find its way.

News Corp stock only rose 1% over the 6 years they owned MySpace. Compare that with Facebook’s estimated valuation over the same time frame, and you can see that Facebook (with its relentless focus on the user interface) rose upwards of 5000%.

Where Do All The UX Resources Go? To The Creep! 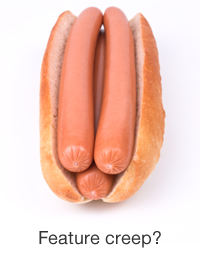 Feature creep, that is. In an article from UXMatters, Ben Werner identifies a common reason many Product Managers overlook UX, and it’s not because they don’t appreciate good UX – it’s because they are won over by the allure of feature creep:

Competent management does realize that the user experience is critical to the long-term health of their company. Unfortunately, when developing software, the temptation to steal from the feature-list cookie jar and try to squeeze just one more feature into the current development cycle by skipping UX work is simply too great for most Product Managers.

He goes on to suggest that the best way to advocate for UX resources is to speak the language of the Product Managers – bring it back to dollars – and outlines a process for measuring the value of UX.

Most Brand Managers do recognize the value of UX. But allocating resources to UX within the complex decision matrix often gets overlooked. Although extra features might score the company more profit in the short-game, a better UX will score more in the long-game.

So here’s the bottom line: brand equity and user experience is measurable in some fashion. In light of how users respond to products based on their user experience, it would make sense to assess feedback about a product’s usability and user loyalty right next to quarterly reports as indicators on whether or not to pull the trigger on buying stock. For those investors looking for long term gains, the overall success and temperature of public opinion on the company is key in order to see sustained success – and public opinion is derived, in large part, from the collective user experience.

If you care about how your users perceive your product, your brand, or your application, and if you understand the financial implications of what happens when users do (and do not) perceive it in a good light, then you need to care about UX. Good design isn’t just a thin layer over your product; in fact, it’s not a separate element at all. Rather, it’s woven into every feature, felt in every interaction, and engages the user to the point where they forget about the design altogether, freeing them to just use the application to its potential.

If you don’t believe me, then perhaps you can believe Google. Google was one of the first companies to vocally advocate for the user experience above all else, and it has worked out pretty well for them. From their “Ten things we know to be true” list they cite the user experience as the #1 priority:

1. Focus on the user and all else will follow.

Since the beginning, we’ve focused on providing the best user experience possible.