Ted came to Intridea two years ago as a designer and in just a short time he’s proven to be a dextrous and pioneering leader. Not only has he become an accomplished project manager, he also plunged into the development world in an effort to become a more knowledgable and powerful designer. He did it. He crossed the streams.

While total protonic reversal was not a direct consequence of Ted’s actions, he did actually learn a thing or two about the gaps between developers and designers and how small divergences in processes between the two groups effects the products they build. He’ll be sharing his insights and solutions at MWRC this Friday. 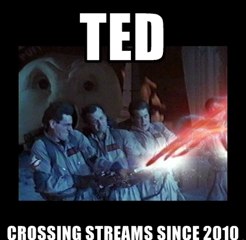 In his talk, “UXDD (User Experience Driven Development): Build for your users, not your tests”, Ted will propose practical and technological solutions to ways developers can increase the overall quality of their applications by aligning and testing their work against the user interface and flow.

In a candid example of why this is important, Ted posits the following user story:

And then adds “…but he might have gained 50lbs.”

Throughout a project’s lifecycle there may be several additions or changes to the overall user flow and back-end architecture. Following the principles of test-driven and behavior-driven development head-down might cause you to miss glaring errors in functionality for the user. So go see Ted’s presentation this Friday at 4:30 pm for a Complete and Perfect Solution™ – he’ll fix all your problems, ever. Just don’t tell him I said so.