Should We Open Source This App For iOS Development?

Here at Intridea we’re currently working on Smashbook, which, once released, will be the premier mobile app and companion for tracking and scoring tennis matches.

Currently we’re working on the API portion of this application, which is being built in Rails and utilizing Grape, an opinionated micro-framework for creating REST-like APIs in Ruby we open sourced.

In the course of development, we needed to build an iOS app that could natively test access to the all areas of the API – it’s parameters, authentication, and more. Here’s what we built: 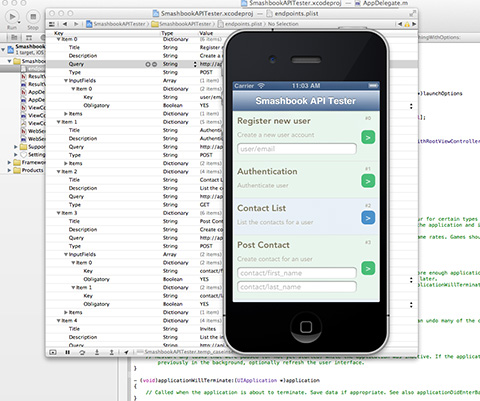 The purpose of this app is to natively test access to the API, rather than just relying upon the web resource forms. And after we built it, we thought “hey, this may be quite valuable to others,” hence this post…

You tell us: should this app be an open source iOS project?

The goal would be to make the source available, so anyone doing iOS development can define access to any API using configuration plists. This would define not only the access type, such as POST and GET, it would also define the fields, the data types, as well as form elements such as input text boxes, image boxes, etc.

In only a few minutes you as an iOS developer, or even an API developer, could test your work from an iOS client, therefore establishing and determining functionality, exceptions, and much more.

So I’ll ask again: should we release this as open source?

Let us know in the comments below. And be sure to follow the progress of Smashbook on Twitter.