Presented by the International Academy of Digital Arts and Sciences, the 20-years running Webbys are a highly respected and coveted Internet industry award. Touted as the “Oscars of the Internet”, Webbys are given for “Excellence on the Internet, including Websites, Interactive Advertising, Online Film & Video and Mobile content”. Past winners have included Al Gore, Meg Whitman, David Bowie, Prince, Thomas Friedman, and countless others—both individual and organizational. 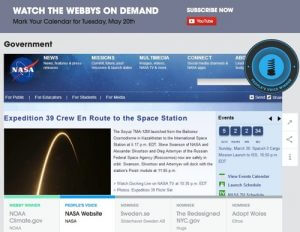 NASA is this year’s People’s Voice Award winner for Government: no small feat, as the Webbys notably bring in more than 1.5 million worldwide voters. What’s more? NASA beat out four other contestants with a whopping 59% of the votes! We are humbled to have worked alongside NASA and InfoZen to build this award-winning website.

Congratulations on your achievement, NASA! You’re out of this world.