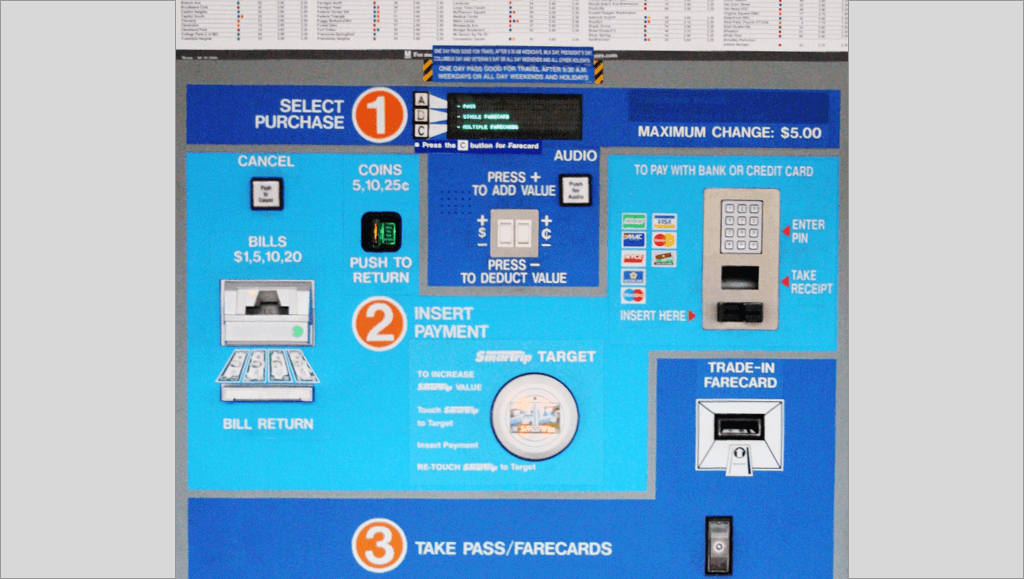 Bring the Ticket Vending Machine into This Generation

Last week marked the 40th anniversary of our Nation’s Capital opening its first metro stations dating back to 1976. In recent years the DC Metro was ranked #1 in the nation but since the metro has only been showing its age and lack of improvements. There is a growing frustration with the D.C. metro riders with the recent fires, constant breakdowns, and outdated technology. So much frustration has led to a creation of a Twitter account called @unsuckdcmetro that is dedicated to retweeting the rants of its 829,200 weekly riders.

There is nothing more annoying or frustrating when you are a tourist or behind a tourist using our unbeloved, outdated ticket machines. This mammoth pay station from the 70’s is far from simple, don’t let the 3 “simple” steps fool you. When you have a moment, watch people straining to read the fares, attempting to read the screen or even guess where to start when trying to get a metro pass. This machine is not friendly to small individuals, handicap, or people that speak English as their second or third language.

Why didn’t we already do this? Instead of rolling out new machines that are up-to-date with the digital era we live in, the DC Metro has been forcing their new technology into a past old broken systems. As a result, you are waiting behind a lost tourist, a local tweeting about a broken machine, or missing your train because you can’t load your card fast enough… It’s time to unsuck our ticket vending machine.
Question is.. Who Rides the Metro?

Locals
These are the 658,000 D.C. residents that are using the metro as a way of travel to get around the city. They are constantly reloading their SmartTrip cards since they take the bus as well and more likely to purchase a monthly pass.

Daily Commuters These are the 129,000 commuters that come from the DMV area Monday through Friday. They are using the metro as their primary travel going to and from work. They are reloading their cards with large values in hopes of not needing to reload their cards as frequently. This group of metro riders are interested in monthly passes.

Occasional Riders
This group is a mixture of DMV commuters and visitors that have taken the metro on special occasions. They are not likely to know what the balance is on their card, or placing just enough money needed.

“@_realmattmason: DC metro is so confusing 😓”tell me about it lol have to ask someone for help everytime I go on it

Tourists These are the 20 million domestic and international travelers that come to visit Washington, D.C. each year. These visitors are using the metro for one trip, round trip, one day, or even one week. They care more about where they are going and how much but this is for the short term since they are visiting versus the folks that live in the area.

How Might We:
Create a faster reload time for the daily commuter?
Check your balance quickly with no hassle?
Allow to purchase daily, weekly, and monthly passes?
Make the checkout process quicker?
Able it to translate into different languages?
Help tourist figure out the value they need on their card?
Build a machine that is handicap assessable?
Make the payment process easier to understand?

Seeking inspiration from around the world… any suggestions???