The ATARC Mobile Customer Experience Project Team has been examining ways that Federal agencies can better utilize customer experience technologies and techniques such as a user centered design approach to improve the internal and public-facing mobile applications that serve employees and citizens of the United States.

They have identified a number of principles that agencies should leverage to properly engage mobile audiences. Brian Lacey, CEO of Mobomo, presented the user centered design strategy that we used for USO, a recent mobile app that launched in the spring of 2017 as part of a series of deployments to over 200+ USO centers.

USO was seeking to design, develop, and deploy a cross-platform mobile application that introduces an additional channel for United States military service members and their families to better engage with USO centers and programs.

Specifically, this mobile application needed to foster greater discoverability of the USO locations, where they provide services and programs offered by the USO through its distributed locations and online. The initial launch was on an iOS native application platform. It was key that our design process focus on the USO end user(s) in order to create a platform that people would enjoy using the most. 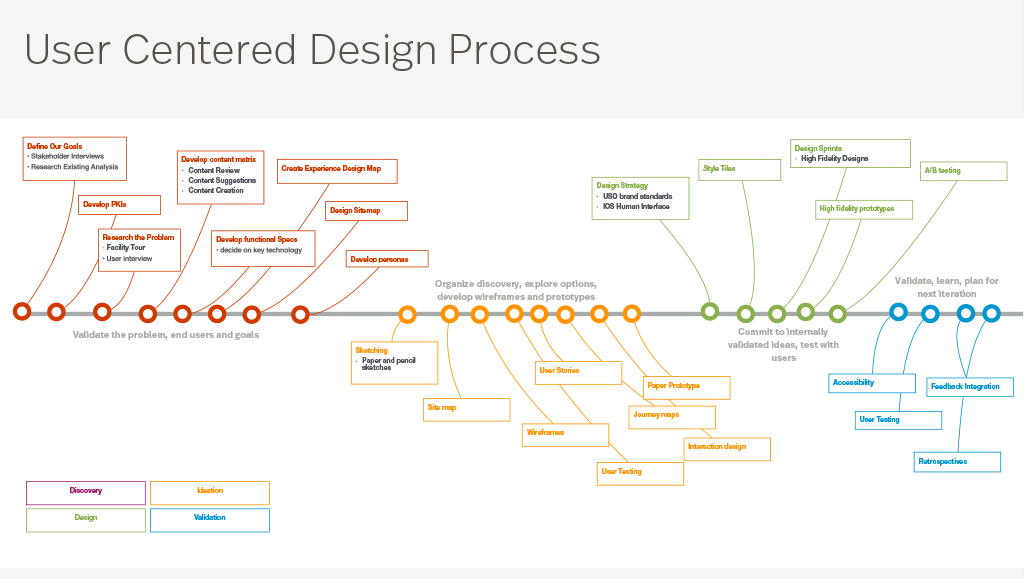 It’s important to create a design for the people that use your product – always keep the user at the center of the design focus. A gorgeous app with poor UX is not a gorgeous app, it is a recipe for user frustration! Design happens at the intersection of the user, the interface and the context.

We started the design process by defining the specific goals of the app. After working with the USO team and deciphering their goals, we were able to better define the overall strategy in which we would use to accomplish the goals they were seeking to achieve.

We defined the goals through stakeholder interviews and preliminary research which helped to better define the main purpose of the app, and the general baseline for the approach that we would use during the process.

As the design phase progressed, user interviews and site visits occurred which gave our team insight in determining the user personas or better known as the ideal end user that would be utilizing the USO mobile platform.

By conducting user personas, this helped us to uncover the end user’s wants and needs in which we based the design of the app that you see today. 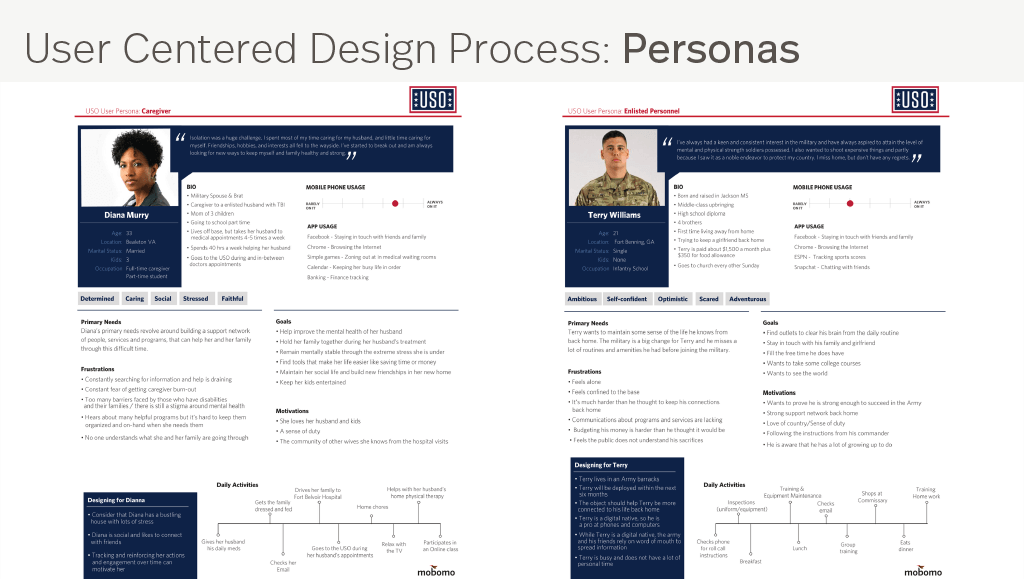 Each user persona has slightly different needs, and being able to narrow in on those specific needs while not neglecting the other persona’s needs creates a balance in the design for the user experience. For example, The “enlisted personnel” persona wants to know what amenities are available and to be able to skip through the check-in line as quickly as possible.

While the “military spouse” persona wants to know what programs are at that specific location so that they can keep their kids entertained. Having a fast check-in is vital to this persona as they are probably dealing with multiple kids who are not as patient in waiting in line as others. The “caregiver” persona is looking for support programs and events so that they can share their similar experiences with other caregivers.

For the case of this project, the USO key user persona’s were identified as the following:

While identifying these different persona’s Mobomo was able to build the experience map and its key features which allows the users to have the ability to quickly check-in and find programs that most closely relate to them, and their physical location. 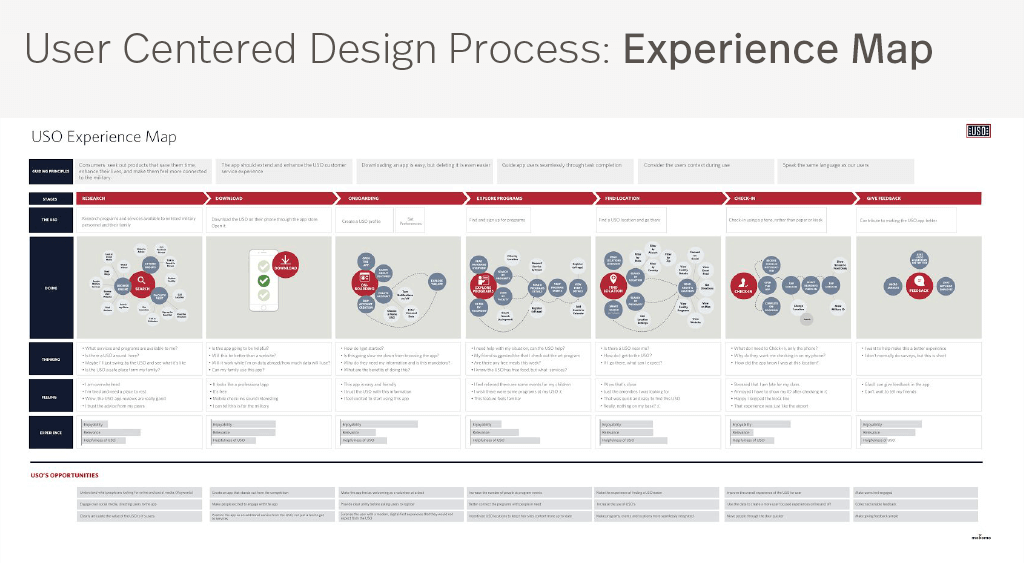 After the experience map and user personas were created, Mobomo began to develop screen sketches, the data architecture, and overall flow for the mobile application. By building these out early in the process we were able to identify possible data fails early on and come up with ways to mitigate these potential issues for the future. 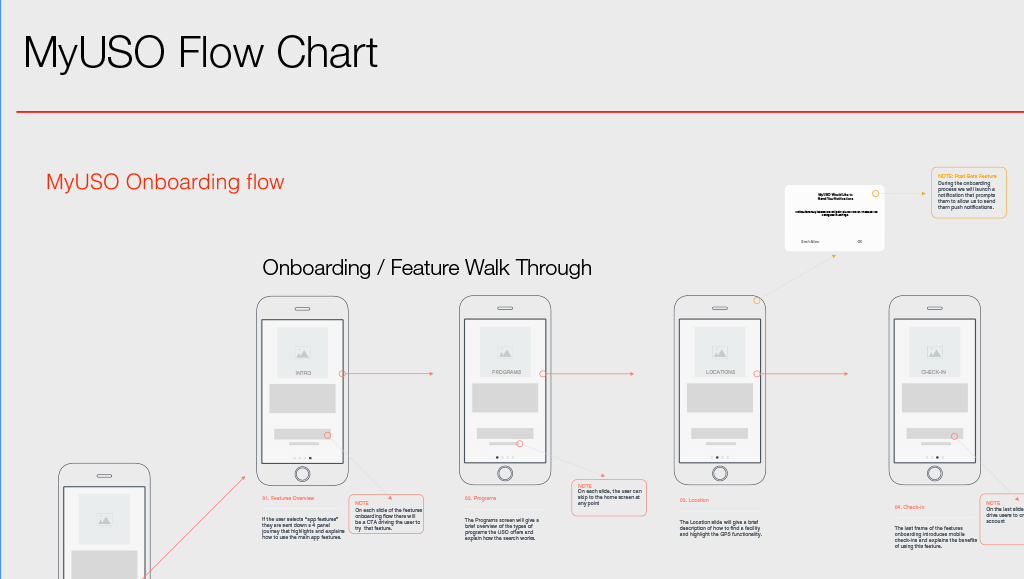 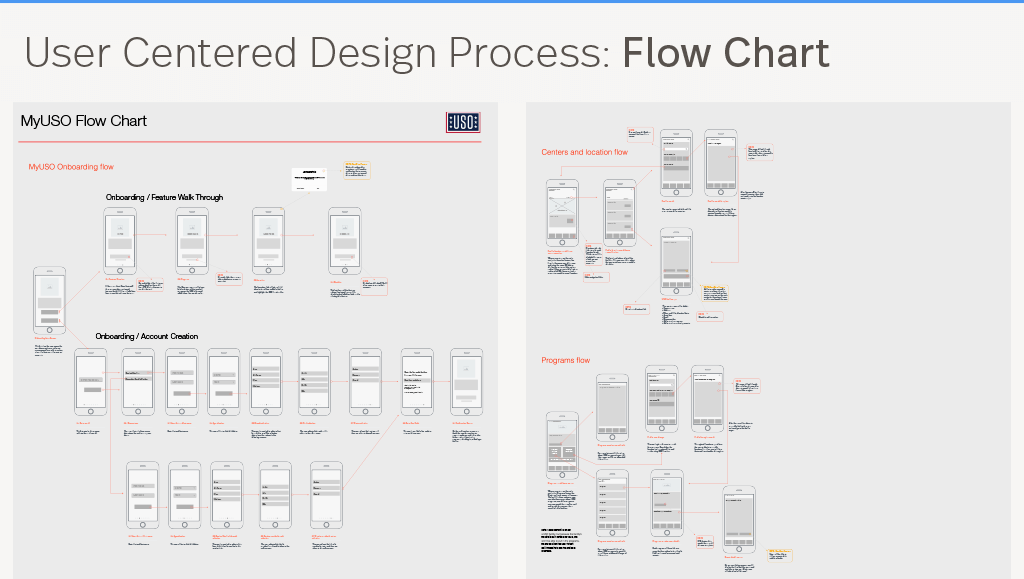 Wireframes are generated from the app architecture and the app flow diagrams as the basic development process begins. These basic designs are tested in the app and built out around the user experience. As a result of the user experience driving the design and development we are able to successfully accomplish USO organizational goals, of creating more user data and simplifying the check-in process.

By accomplishing both of these issues while driving the app around the user we’ll be able to ensure the app’s longevity while still being a useful tool for both the user and for the organization. 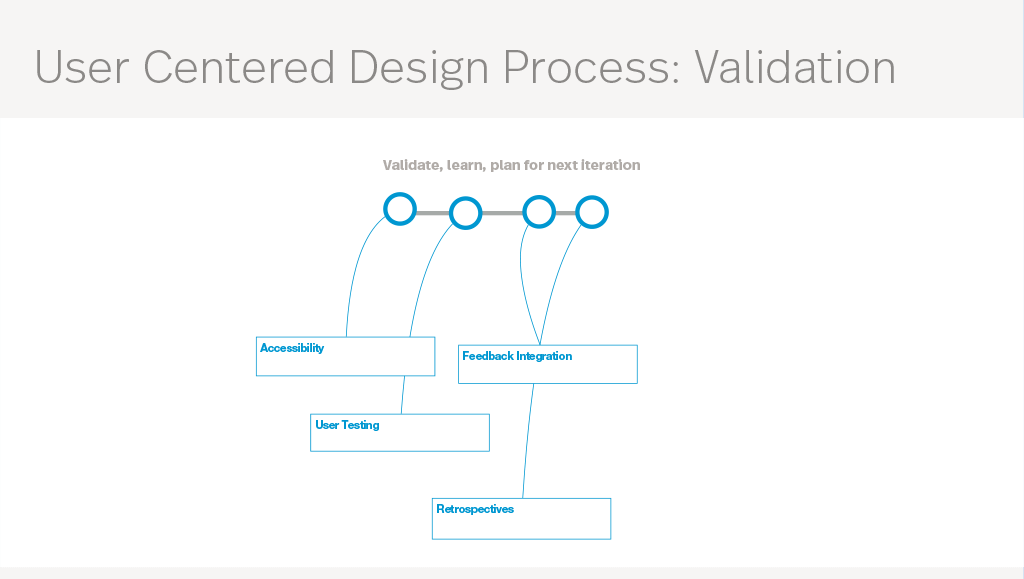 Mobomo focuses on what method of communication is best to get feedback from the end users versus what is assumed to be the best method- this is why Mobomo has been successful with human centric design feedback and making adjustments based on the actual user feedback.

Like most, USO is big on user engagement, the surveys and direct email were specific to USO.  They wanted to be available in a variety of different ways to receive feedback on how they can be improving as well as what other services they can improve upon to offer to the end user.

As we were building the app, feedback from end users became an important facet for the USO as an organization. They like that there is a survey in the hands of potentially all of their end users which can help them improve their service.

The survey is specifically about the user’s experience at a particular USO. That information is fed back to that location through a different mechanism.

The user has the option for General USO Feedback, so that directs them to an email address that lets the user give the USO as an organization feedback. And then finally there is an direct email link for the user to give feedback on the App itself and how the app can improve to better serve that specific person. 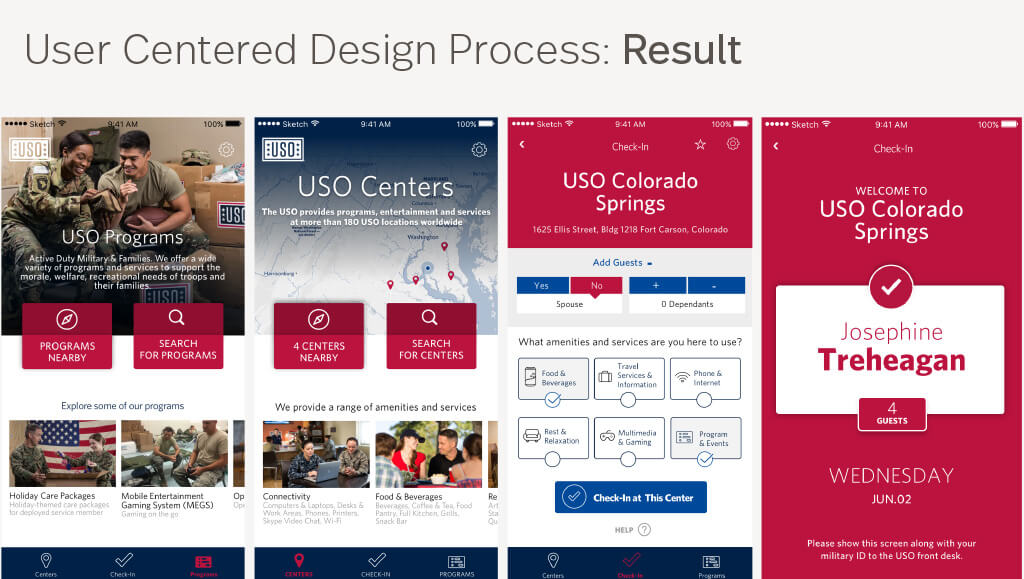 Since launching the iOS app, the next phase will be adding more enhancements to the iOS app, features could include: Program check-in, calendar integration, event signup, push notifications, and USO news.

Aside from enhancements to the iOS app, we are looking forward to expanding USO’s mobile presence by including an Android application into their digital presence. You can find the iOS app in the App store. Check out the full USO app!