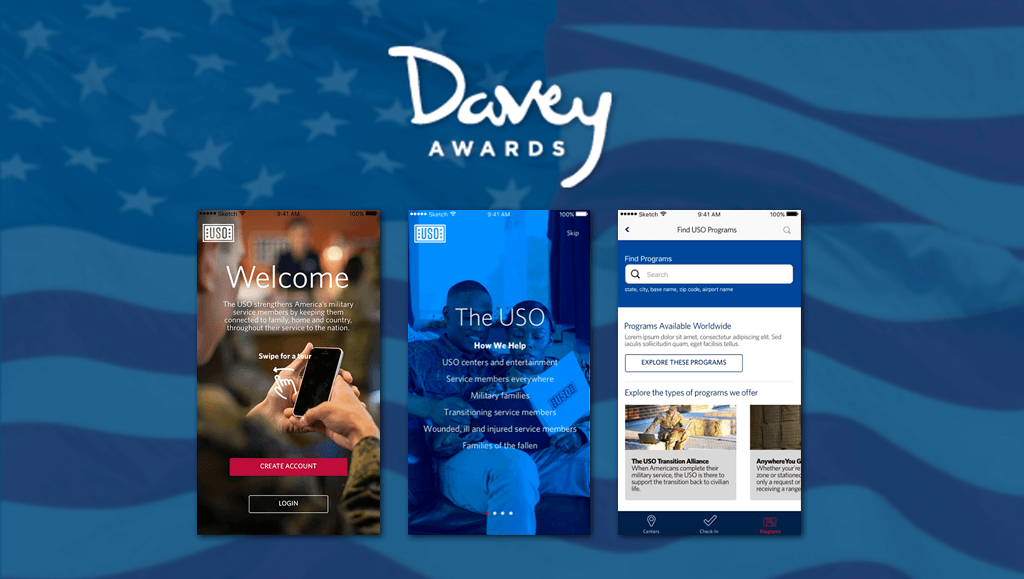 Mobomo is honored to announce that the USO’s mobile application has won a Silver Davey Award!

“David defeated the giant Goliath with a big idea and a little rock – the sort of thing small agencies do each year. The annual International Davey Awards honors the achievements of the “Creative Davids” who derive their strength from big ideas, rather than stratospheric budgets.”

Mobomo was able to recognize the USO and the mobile application that we partnered with them to create.  This application fosters greater discoverability of locations where USO provides services and programs offered by the USO through its distributed locations and online.  Prior to discovery, USO was seeking to design, develop, and deploy a cross-platform mobile application that introduced an additional channel for United States military service members and their families to better engage with USO centers and programs.  Currently, there are 200+ USO locations that all create their own content. We were able to pull the CMS data and integrate it into the app so that the service member receives the content from the service center that they are physically at or that is most adjacent to them.

This mobile application launched in the spring of 2017 as part of a series of deployments on a fixed schedule starting with a limited beta release to 15 USO centers.

The United Service Organizations or better known as the USO strengthens America’s military service members by keeping them connected to family, home and country, throughout their service to the nation. USO, a private, nonprofit organization, serves the men and women in the U.S. military and their families throughout their service – from the moment they join, through their deployments and as they transition back to their communities. Over time, the USO has become the vital bridge between Americans and their military service members. The USO provides programs, entertainment and services at more than 180 USO locations and hundreds of other military sites worldwide, including Afghanistan, Kuwait, United Arab Emirates, Germany, Italy, Japan, Guam, South Korea, Djibouti and the United States.

Mobomo builds elegant solutions to complex problems. We do it fast, and we do it at a planetary scale. As a premier provider of mobile, web, and cloud applications to large enterprises, federal agencies, napkin-stage startups, and nonprofits, Mobomo combines leading-edge technology with human-centered design and strategy to craft next-generation digital experiences.