I’ll be participating in Blogout09 in Singapore on March 6, giving my Communications Inside Out (see below) talk, which is based loosely on the last chapter of my book, SocialCorp: Social Media Goes Corporate. I’ll be in the esteemed company of Yongfook, the Ashton Kutcher of the Singapore social media scene, and Melvin Yuan, who is referred to by Kevin Lim (aka @brainopera) as “a ridiculously thoughtful public relations gentleman in Singapore.”

In commemoration of my visit to Singapore, Kevin has created this stunning photo montage: 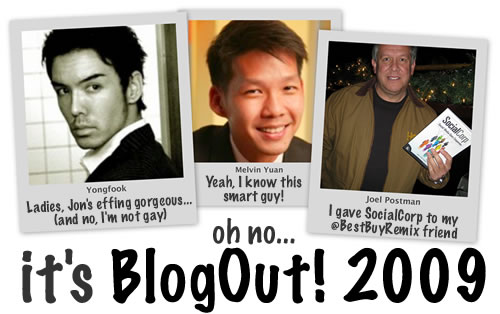 Note that Yongfook is cited for his good looks, Melvin for his intelligence, and me for giving away copies of my book. This is how I want to be remembered! On the other hand, can either of them drive a Zamboni? I think not! My picture is a composite and the hand with the book doesn’t even belong to me! I appear to be grimacing after eating a bug or something.

Here are a few things you might not know about me:

Hope to see you in Singapore!

Now that the social media “dust” has settled, many companies feel like they’ve made the transition to a stable, predictable, Web 2.0 world. Not so fast! I’m going to lead a conversation about a second wave of changes underway or rapidly approaching. Communications Inside Out, based on the final chapter of my book, is loosely structured around five key shifts in perceptions about what social media is, and how it behaves:

For example, the attention span of the average person online has grown shorter and shorter, and with it, the length and duration of online content has similarly been reduced. Online videos, once considered “short” at three minutes, are now less than a minute, or even a few seconds in length. Entire “blog posts” have been reduced to 140 characters on sites like Twitter. In other words, while the emphasis in social media was on speed, it is now on brevity. Similar shifts have taken place elsewhere. My presentation will take a random walk through a handful of such shifts, helping participants better understand the nature and role of social media in the future.