Is It Time to Add “Apps” to Marketing’s Venerable “4 Ps”? 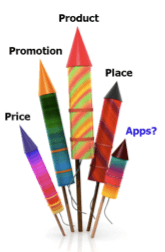 Amazingly, despite the unprecedented upheaval and transformation in marketing strategies, techniques, channels and tactics during the last forty years—not to mention marketers’ penchant for postulating all manner of new philosophies, methodologies, rules and acronyms–the Four Ps of Marketing have remained unchanged.

But perhaps now there is good reason to revisit and refresh marketing’s Four Ps: the emergence of “applications” or “apps” as a new means for organizations to acquire, retain or otherwise engage customers and prospects.

An app is a small, self-contained computer program that provides value or engagement to a mass or targeted audience in a community, marketplace or platform. Think of Scrabulous for Facebook; WeatherBug for the iPhone; NBC’s Saturday Night Live widgets; or the Wall Street Journal’s reader for the Blackberry. Apps are commonly grouped via their method of distribution and/or platform:

* Mobile apps: Designed to leverage the unique characteristics of mobile audiences and smartphones, such as the need for location-based information or lightweight, portable versions of larger, more complex services such as Salesforce.com

* Community- or platform-based apps: Those that are developed exclusively for and can only be used on a particular site such as Facebook; and

* Widgets: Portable apps that can reside on multiple third party sites and blogs.

The proliferation in the use of apps by large and small businesses, as well as non-profit and government organizations is well-documented. Apps have been developed by brands of all stripes as standalone marketing tools or to target fast-growing, communities such as Facebook (350,000 apps used by more than 70% of Facebook’s 250 million users) or the iPhone (65,000 apps available; 1 billion downloads in first 9 months).

And due to their ability to achieve low-cost global or geographically-targeted distribution; their relatively inexpensive development; and rapid time to market—as well as their virtually unlimited potential for creating unique and valuable user experiences—apps have only begin to reach their potential as a new category of marketing tool.

Let’s examine the explosion of one type of app: mobile. The transformation of the mobile web landscape is reminiscent of the original trajectory of the World Wide Web. Very quickly, the consensus shifted from “Why does my company need a Web site?” to “Why don’t we have a Web site yet?” That shift was caused by the reduced cost of developing sites, their practical and proven use in engaging customers, the increase in available bandwidth; and technological advances that helped organizations deliver more useful and relevant user experiences.

The same phenomenon is occurring today with mobile apps: A recent New York Times article reports that nearly half (48 percent) of phone users shop for apps more than once a week and about the same number (49 percent) report using apps on their phone for more than 30 minutes a day; the cost of developing mobile apps has dropped dramatically; and technological improvements are enabling more speed and a better user experience.

How do “apps” relate to Marketing’s Four Ps?

Apps can deliver some portion of the product experience; promote the brand; place themselves wherever customers are; and/or be priced to stimulate trial or engagement. But while “apps” combine elements of each of the Four Ps, they’re neither fish nor fowl–they don’t neatly fit into any one category.

In other words, apps are not products, promotions, channels or pricing strategies. But an app can have some or all of these elements. Apps are…well, they’re apps. Simply put, apps have become a box you check in your marketing plan, right next to the other Four Ps. It’s hard to imagine a new brand launch, Hollywood film, ad campaign or even a fundraising push occurring without the question being asked, “Should we develop a mobile or Facebook app for this?”

Let us know what you think: Do apps deserve their own slot in the marketing mix pantheon, right alongside the traditional Four Ps? Please join the discussion by adding your comments below.

This article was co-written with our friend Bob London, president of London, Ink, a marketing and communications consulting firm headquartered in the Washington, DC metro area.