Looking Back at RubyConf India 2010

The first ever RubyConf India took place in Bangalore, India at the Royal Orchid Hotel last weekend. Our Director of Research & Development, Pradeep Elankumaran, and I were there speaking. The event was put together by ThoughtWorks and was unlike any other tech conference we’ve ever attended. It wasn’t the talks, the speakers, or the format — it was the overall attitude of everybody who attended RubyConf India 2010 that made it very special to us. Everybody who attended were extremely passionate about learning and showed so much interest in all of the topics that were presented for the two days of the conference. 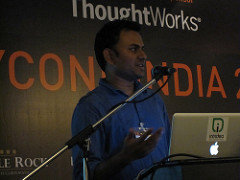 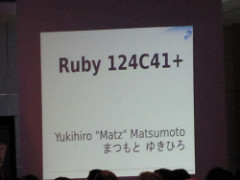 All of the topics presented at RubyConf India 2010 were interesting. Roy Singham, Founder and Chairman of ThoughtWorks, kicked off and closed the event. Ola Bini of ThoughtWorks gave a talk on “The Future of Programming Languages”. Nick Sieger from Engine Yard was there to give his talk on “Rails 3 Through Choices”. The highlight of the two-day event was when Yukihiro “Matz” Matsumoto, the father of Ruby, gave a talk via Skype about the future of Ruby. He also mentioned that work on Ruby 2.0 would start in August of this year. There were also talks by Nick Sieger, Arun Gupta, Aman King, Brian Guthrie, and many others. You can see the whole list of speakers and talks by going here. 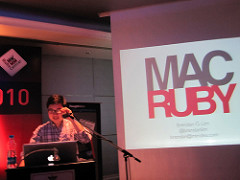 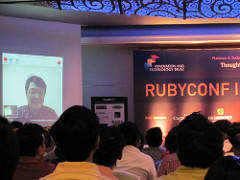 Our very own Pradeep Elankumaran gave two talks. His first talk was titled “The Big Wave of Indian Startups – (Almost) Effortless Entrepreneurship“, which sparked a large amount of audience participation and was one of the most interactive sessions of the weekend. His other talk was “Messaging Queueing in Ruby – An Overview“, which went over different choices we could use to do queueing in Ruby. I gave my talk on MacRuby, titled “MacRuby to The Max“, which went over MacRuby, HotCocoa and how it compared to Objective-C. I even did some live coding and created a quick and easy currency converter.

We had a great time at the first ever RubyConf India. We definitely want to thank ThoughtWorks for putting together a great conference that was extremely informative and enjoyable. You can bet that we’ll be there again for RubyConf India 2011.