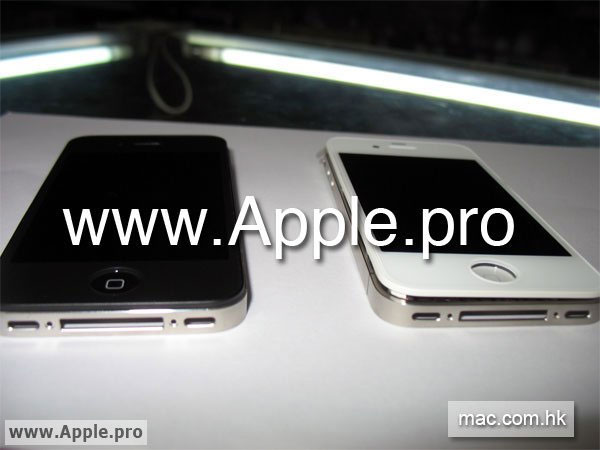 There’s been yet another “leak” of a possible prototype of the 4th-gen Apple iPhone. A photo (above) shows both a black and a white phone with larger screens. Given all the rumors and SDK evidence, it seems obvious that the OS 4 iPhone will have video calling and the larger screen resolution necessary to pull that off.

Fortunately, in just 2 weeks, all the speculation will be put to rest when Apple’s 5-day WWDC (Worldwide Developers Conference) kicks off on Jun 7th. Steve Jobs will start the event off with a keynote address to over 5,000 developers at the sold-out event. There’s an email circulating around the Web that’s supposedly from Jobs telling someone that “you won’t be disappointed,” in reference to what he’s probably planning to announce at the conference. I.e., probably the new iPhone, other features of the new SDK, and a mention of the countries where the iPad will by then be available.

What Jobs might not know is the new but celebrated iPad hasn’t only been banned in some countries but also in New York’s Yankee Stadium of all places. Apparently the stadium’s security policy considers the iPad to be in the laptop category, and laptops are not allowed in the stadium.

Has anyone told Yankee Stadium security that even the TSA (Transportation Safety Authority) differentiates between iPads and laptops? That’s actually a very disappointing fact. If more venues ban iPads, then carrying a tablet computer around might not become a common practice. I carry my iPad with me wherever I go, almost without fail. Now if I’m driving, I could always leave my iPad hidden somewhere, but if I’m walking or taking public transit — which is very likely in New York — then what am I supposed to do with it? Considering London will have full Wi-Fi access for the 20102 Olympics, I’m guessing they won’t be banning the iPad at venues there. Well, given that many Apple stores are sold out of the iPad, especially the 3G model, I’m guessing not a lot of people are going to be worried about this sort of ban, at least for now.

Is Apple stealing the market? Google announced last week that they were shutting down their online store and now Nokia is closing their flagship New York store. The Chicago store, on the other hand, is not closing. Wait a minute; doesn’t New York have a larger population than Chicago? Wouldn’t it make more sense to do the closing the other way around?

AT&T just got the Palm Pre Plus, but they’re charging $150 for it despite Verizon’s lower price. However, if you’re a new AT&T customer, you can get the phone for $50, but without the free Palm Touchstone charging dock. AT&T’s Pixi Plus will be available Jun 6th, to join the new AT&T Palm Pre Plus. The free Touchstone charge deal doesn’t apply to the Pixi Plus [Engadget]. If you get any smartphone from AT&T, be forewarned that they’ve increased the early termination fee from $175 to $325, effective Jun 1st — whether you’re a new subscriber or renewing your service.

The U.S. FTC finally approved Google’s purchase of mobile ad network AdMob Inc. While it took them six months to approve, the decision was partly to do with Apple’s own purchase of ad network Quattro Wireless. If I’m not mistaken, Apple’s purchase will result in their iAd network, announced at the same event earlier this year where Steve Jobs revealed some of the features that iPhone OS 4 would have.

The iPad might have a very long lasting battery but most smartphones seem to fizzle out in just a couple of hours of use. For example, the Palm Pre Plus I bought for it’s Mobile Hotspot feature (to power my WiFi-only iPad), has a battery that dies long, long before the iPad. But Google’s Larry Page recently said that if your Android-powered device isn’t lasting a day, there’s something wrong with your apps.