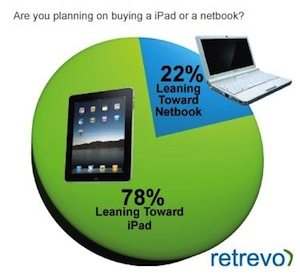 Are netbooks still favored over the Apple iPad? According to a survey by Retrevo, almost a third of U.S. consumers who had planned to buy a netbook ended up with an iPad. The survey further indicates that the most desirable netbook feature is it’s portability.

I’d have to agree with the portability. I gave my wife an HP netbook to supplement her older MacBook 15″ and she loves it, despite that it’s not a Mac. If she’s on the go, she tends to favor the netbook because it slips easily into her handbag. It also has 3G Internet, whereas if she took the Mac, she’d need to find a wireless network to get online — which makes up the bulk of the work she does on a computer.

On the other hand, I favor my iPad, despite that it’s a WiFi-only model. But one is not a replacement for the other. Using an iPad is an experience that’s hard to describe. You have to try it to understand; don’t listen to people who put the iPad down without actually trying it. I was skeptical because its touchscreen-based computing has some limitations that a netbook does not, which is why the two types of devices are not interchangeable. What an iPad offers is a wholly different experience.

Still, despite the survey results, netbook sales are down and, in comparison, iPad production could increase from its current rate of 1-1.5M units/month to 2.5M units/m. So maybe what the survey failed to ask was how many people who intended to buy an iPad bought a netbook?

Update: After posting this, I found the Retrevo survey summary link, and it appears that they did ask people whether they were leaning towards a netbook or iPad, and nearly 80% said the latter.