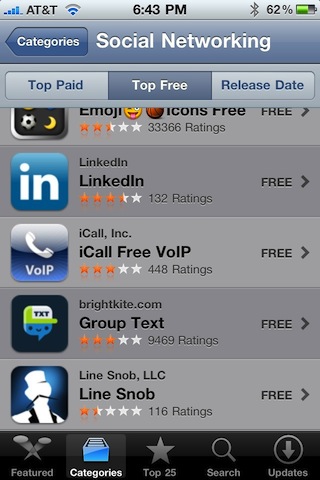 Don’t want to waste your time standing in line more than you need to — especially for launches of hot gadgets such as Apple’s iPhone 4, or for concerts or other popular events? There’s an app for that: Line Snob!

If you hadn’t heard, Apple, Inc’s official iPhone 4 launch day was today, Thur Jun 24th, and there were lineups everywhere in many of the 9 countries that were part of the first round release. From all accounts, it was a madhouse, and there’ll likely be lineups for the next few days — maybe even weeks in some areas.

Save yourself some time by finding out how line conditions are with the Line Snob app running on your existing iPhone, iPad, or iPod Touch. Or let everyone else know by posting line conditions wherever you are (within the 25 cities that are covered by the app).

Of course, Line Snob isn’t just for reporting/ viewing iPhone 4 sales lines, but in fact any live events or venues in your city. It’s the social way to wait in line.

Line Snob, which was built for Line Snob, LLC, by Mobomo, nearly melted our servers, thanks to the huge surge from today’s iPhone 4 line updates after being headlined in Gizmodo and covered by CNN. As a result, it made it to the Apple App Store’s Top 25 Apps list for the Social Networking category.