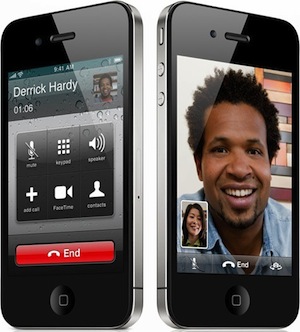 Apple, Inc., loves to be a game-changer, and the new Apple iPhone 4, announced yesterday, will be one both for some of the hardware aspects as well as for the video chatting feature, FaceTime. In fact, FaceTime might have even more of a social impact than people realize, given that it’s intended to be an an open standard. This is a brilliant move by Apple. Why? Well first let’s look at the current situation.

When the 4th-generation iPhone becomes available in the first round of countries on Jun 24th (preorders online in those countries starting Jun 15th), FaceTime will work only over WiFi, between two 4th-gen iPhones, only. There are consumers who will get the iPhone 4 for that reason alone. That’s a very limited usage scenario and not necessarily enough to win over sales of iPhone 4.

However, there are some other parameters to the usage equation that are not yet taken into account.

Apple is great a creating market demand where it didn’t even exist. Look at the iPod. Did we need iPods, given there were other mobile audio players? Of course we didn’t. But they created what became a classic consumer electronics device, and the technology behind the iPod seems to have helped fuel the development on the iPhone/ iPod Touch and iPad mobile devices.

FaceTime is not hardware, of course, but video calling has been something that at least North Americans have been promised for decades, and which seems to have stayed in the realm of science fiction, at least for the masses. Until now. We really do need one calling protocol to make it work, with the least technical difficulties, and by being first, Apple has the advantage.

Okay, Apple’s not first with video calling. A number of VoIP desktop applications — e.g., Skype — have had it for several years now. Also, video calling has been available for conferencing systems — but such systems are costly and definitely not for the mass market. Apple’s not even first with video on calling on smartphones, since a couple of devices were announced within the past few weeks. However, Apple will be perceived as first because of the open standard offering.

I have no doubt that Apple can get most or all of the big players such as Microsoft and Google on board to support the FaceTime standard, and in doing so, they stand to further the company’s brand. Even if they don’t immediately convert non-Apple device FaceTime users to hardware purchasers. How could they get them to convert? By offering additional FaceTime features available only on the iPhone. By offering enterprise integration for FaceTime on the iPad (a future model, with a front-facing camera). By constantly reminding non-Apple app developers and users that 3rd-party apps get access to FaceTime features only with the Apple iPhone SDK.

However, Apple creates the market demand for FaceTime, I’m very certain they’ll do it, and video calling will likely be integrated into iPhone OS apps very quickly. Imagine gaming, social network, healthcare, distance education, tech support, service calls and many other niches having next-generation mobile apps with video calling integrated. Even social interaction will be forever changed. (For example, imagine families spread across the globe who will now be able to see each other during those long periods when they cannot meet in person.)

If Apple can convince the right players to join in, FaceTime is going to have a huge impact on mobile application usage and on the way humans interact.

Want to discuss a mobile app with video calling features for your business or projects? Feel free to contact us to discuss your app or mobile campaign needs.