She began college coursework at the age of 15, practices the Brazilian art of capoeira, and started her career by organizing fundraising events for political campaigns. She’s part of the virtual glue of our company. In this week’s Intridea Insider, meet Amelia Saletan, one of our champion Executive Assistants.

Born and raised in “the little blue dot in the sea of red,” Amelia shares the story of her novel upbringing in Austin, Texas; “I lived across the street from a middle school and two churches and never set foot in any of them.” She was home-schooled by her progressive parents, a chemist and a polling consultant. Amelia’s blend of homeschooling and unschooling was enriched with formal math classes taught by her mom, correspondence classes in middle school, soccer practices, acting classes, and then college coursework that she added to her schedule at the age of fifteen. Between classes, self-directed learning, part-time jobs, and time with friends, she also spent 2-3 hours of her day in a pre-professional ballet program.

In referencing being homeschooled in Texas, Amelia admits, “We got weird reactions when we told people we homeschooled; it was kind of funny for me to realize people thought I must be strange. It wasn’t until I was a teenager that I realized people thought we must be religious fundamentalists! But there was a large community of homeschoolers in Austin, and very few of them (if any!) were doing it for religious reasons.”

Amelia set off for American University in Washington, D.C. after taking additional classes at a community college, working and spending some time traveling in Europe. “I had applied to ten colleges because I really didn’t know where I wanted to go. They varied, but were mostly smaller liberal arts colleges. I ended up coming to D.C. and I got my Bachelor’s in International Studies.” Although she stuck with International Studies, she admits that her true love was domestic political campaigns. “After my freshman year I got a summer internship and stayed in D.C. I continued to intern for political consultants the rest of my summers here. I think students in D.C. are a lot more professionally focused than in some other parts of the country. People are very concerned about getting jobs, internships, and building a resume.” While she was certainly driven like her peers in D.C., she says that really, “I just loved what I was doing. And it was way more interesting than sitting around at home.” 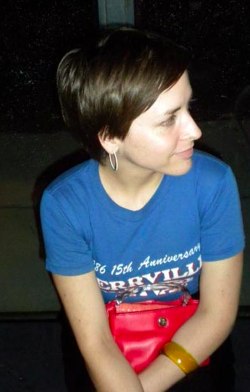 The internships she had with consultants helped to develop and sharpen her research and graphic design skills, which landed her a job on the finance staff of a state race in Mississipi after graduating from AU. “I spent six months organizing fundraising events across the state. We unseated a 30+ year incumbent in the primary, but we lost the general election.” Afterward, a job in political fundraising consulting brought her back to the D.C. area.

She found her place at Intridea after seeing an ad on Craigslist for an executive assistant. “I applied, and thankfully I heard back! No one responds to applications anymore!” After a few phone interviews, she met Dave Naffis, co-founder and Senior Partner, and she was hired to help run the administrative side of Intridea. The work she does is always changing, and each day always brings something new, but you can count on talking to Amelia if you call Intridea. She answers the phones, enters info into our CRM, fields HR questions, manages paperwork for employees and the senior partners, processes expense forms, pays bills, works directly with our accountants, and a hundred other miscellaneous projects that come her way. Amelia puts her research skills to use by scouting for and then scheduling relevant events that Intrideans might be interested in attending.

Amelia often works directly with the Senior Partners, including Chris Selmer, who is always confident about Amelia’s ability to manage the chaos that comes with her position: “Amelia is the consummate professional – whether handling pushy salespeople on the phone, overdue contractors in the office, or dealing with HR issues over email, we know she leaves a lasting positive impression of Intridea.”

The majority of Intrideans are programmers and work from the comfort of our home offices, living rooms and porches. Amelia’s job, however, is a bit harder to do strictly from home, so you’ll usually find her in our D.C. office. “Although working with a distributed team can be challenging sometimes, I like the flexibility of being able to work from home occasionally. It definitely came in handy during Snowpocalypse. I miss being able to go right up to someone and get an answer if I need it right away, but I’m learning to anticipate things in advance and bring them up.” Internal communication aids like our enterprise microblogging and collaboration application, Present.ly, help to bridge the physical gap between our distributed team by essentially putting us all in the same virtual “room”. Present.ly, along with other communication tools like email, Skype, and Instant Messaging help to make Amelia’s job a bit easier whenever she has to communicate with distributed Intrideans. 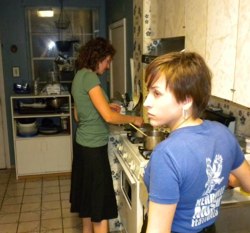 Although Amelia isn’t a programmer, we still consider her a “geek” by our standards. When she was a teenager in Austin, she helped run an online text-based role-playing game, Redwall MUCK. “It was similar to a MUD or MUSH, but there were no levels, so you didn’t have to spend time leveling up. The focus was on good writing, good characters, and good stories. That’s when I developed an interest in 1) how you get people to follow rules, 2) writing how-to documentation, and 3) making things as easy as possible for oneself down the road. For example: Developing good processes and good documentation = fewer questions and snags down the road.” Spoken like a programmer! In fact, my interview with Amelia leaves me wondering if she might ever dive into programming one day. “I have an interest. But I haven’t gotten around to it. I’m not sure if it will make it off my list of ‘things I’d love to learn’ onto my list of ‘things I’m putting in serious time to learn’, but we’ll see!”

Amelia probably won’t stay in the D.C. area forever, but for now she enjoys living in her upper NW D.C. neighborhood, which she says is “kind of like living on the main street of a small town.” She has quick access to groceries, dry cleaning, little restaurants and a tiny movie theater. She spends several evenings a week doing capoeira classes, which she describes as a fluid, Brazilian martial art:

Capoeira is a dance, a fight, and a game, as people say. Capoeira has groups, which are a little like gangs, sort of like the dance-fighting gangs from West Side Story. I am part of Oficina da Capoeira, which is based in Brazil and has a presence in many countries. We have classes at BETA Academy in Columbia Heights. There’s also an Oficina group in Baltimore. We work on technique and different movements and sequences in class, but when you actually play capoeira you do so in a roda (circle). People take turns going into the center of the circle, two at a time, and playing. There are slow and fast games, games that emphasize floreios (flourishes or tricks), and games that emphasize more aggressive moves. The people making up the circle and watching the two in the middle clap, play instruments, and sing songs.

Amelia maintains a healthy work-life balance, between her busy days with Intridea and her active nights of martial arts with a network of friends she has established at capoeira classes. We think of Amelia as an Intridea “support beam.” Her efforts fortify and prop us up, so we can focus on the mechanics of programming, project management, healthy client relationships, code quality, open-source contribution, and more. 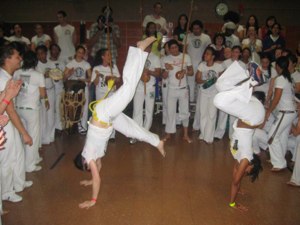 Much more than your average executive assistant, Amelia is unique in that she understands the tech space, brings PR and graphic design experience, and is self-directed (a quality she attributes to her education back in Austin). Plus, she can hang with the geeks as well as any programmer can, so we can’t help but love her.

This post is part of a weekly series, called “Intridea Insider”