Votifi, a mobile-based political polling and analytics company, is a finalist in the fourth annual South by Southwest (SXSW) Accelerator at the 2012 SXSW Festival in Austin, Texas. Launched in June 2011, Votifi is an innovative platform that promotes engagement on political issues across social and demographic divides. The app is a personal, virtual, mobile soapbox for political engagement. 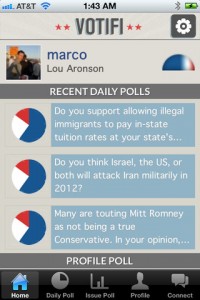 Votifi launched its iPhone application at SXSW. The app provides political information and a platform to amplify the voice of the mobile voter. Mobomo developed the Votifi app was developed by MOBOMO.COM of Bethesda, Maryland and its founder Barg Upender. The MOBOMO team lead by Brian Lacey has worked diligently to ensure a successful and timely SXSW launch.