On Nov 15, a strange species known as “Intrideans” descended upon Manhattan. Armed with posterboard, sticky tape, sharpies and whoopee cushions, they glided into the futuristic New York Times building in Times Square and sputtered in code, fooling but everyone there.

The NYTimes Open Source Science Fair was a blast. We were exposed to a wide range of interesting projects, got to hobnob with fellow developers, and showcased some great works authored by our own team members, including Ted O’Meara’s GreenOnion, and Michael Bleigh’s OmniAuth and Grape.

The event kicked off with table setup in quaint and traditional science fair style. We like that the NY Times kept things simple – table, posterboard, stick stuff on it, done. The focus was clearly on project quality and discussions among attendees, which embodied the spirit of the whole event. The NY Times could’ve easily turned this into yet another extravagant conference with a bunch of unnecessary bells-and-whistles, so total street cred to them for knowing their audience and focusing on the work rather than the frills. 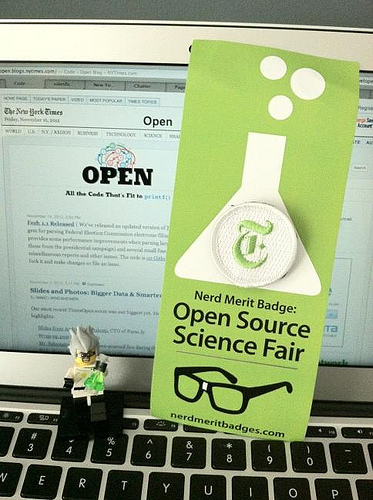 After table setup the floor opened to general attendees (150+ developers), and Intridea’s Ted O’Meara got a chance to give a two-minute intro to GreenOnion, a UI testing tool that records screenshots and compares them to one another. GreenOnion is a clever way to prevent regression issues in the UI and eliminate some of that frustrating back-and-forth between designers and devs during new releases (“No, it was 10 pixels to the left, remember?”). Ted gave a neat little summary before we were ushered on to the next few exhibitors, which included sharp-shooting developers from GitHub and MongoDB among others. 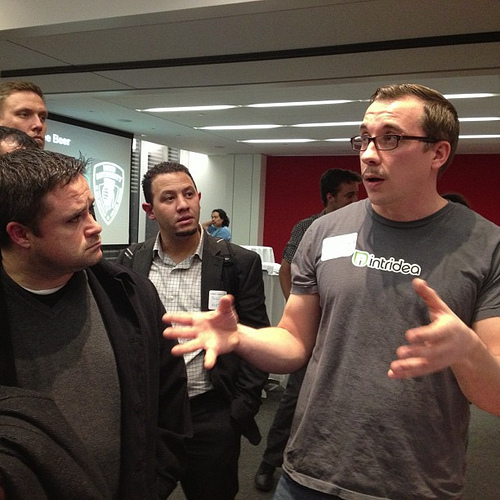 After a grub break for pizza, pasta, and salad, the floor become a sit-down area for the speaker’s portion of the event, featuring presentations by Zach Holman of GitHub, Rebecca Murphy of Bocoup, and Jeremy Ashkenas of the New York Times and DocumentCloud.

Before the sit-down though, we went on a little whoopee cushion spree, placing our naughty “Bad UX Blows” noise-makers on seats and handing them out to fellow attendees. At multiple points during the handout we got sheepish grins saying, “Yeah, I already grabbed three.” This naturally made us feel very, very proud.

Getting back to the speakers series, we were impressed by the quality of projects, the witty presentations, and the overall sense of community that came through. Listening to the speakers, some of the main takeaways we got were:

At the end of the event the NY Times crew handed out prizes–some funny, some serious–and Intridea’s Ted O’Meara won “Highest Exhibitor-to-Booth Ratio”! Yes, we were quite the posse :). 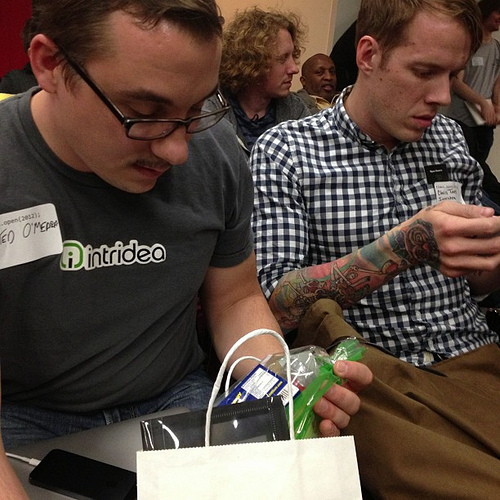 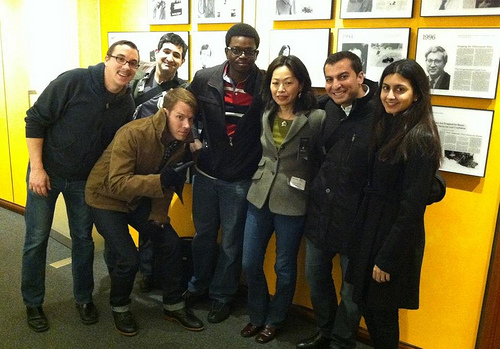 We were honored to be a part of such a fun gathering and make valuable connections in the tech community. For a full list of winners and more coverage, check out the NY Times blog post on the event.

Now, we must zip back to Intridea-land. Until next time, New York.