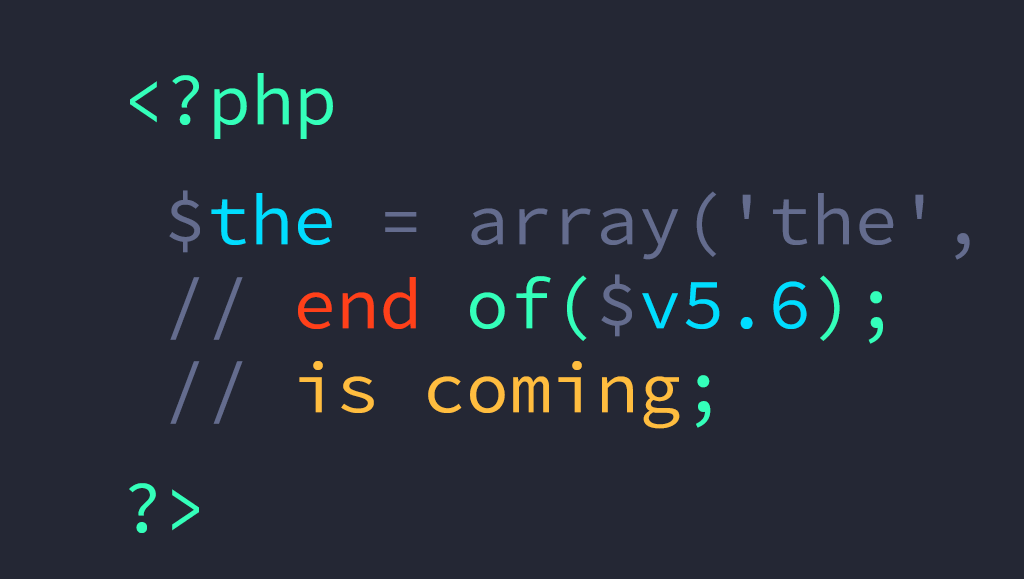 PHP 5.6 will officially be no longer supported through security fixes on December 31, 2018. This software has not been actively developed for a number of years, but people have been slow to jump on the bandwagon. Beginning in the new year, no bug fixes will be released for this version of PHP. This opens the door for a dramatic increase in security risks if you are not beginning the new year on a version of PHP 7. PHP 7 was released back in December 2015 and PHP 7.2 is the latest version that you can update to. PHP did skip over 6; so don’t even try searching for it.

Drupal 8.6 is the final Drupal version that will support PHP 5.6. Many other CMS’s will be dropping their support for PHP 5.6 in their latest versions as well. Simply because it is supported in that version does not mean that you will be safe from the security bugs; you will still need to upgrade your PHP version before December 31, 2018. In addition to the security risks, you have already been missing out on many improvements that have been made to PHP.

What Should You Do About This?

You are probably thinking “Upgrade, I get it.” It may actually be more complicated than that and you will need to refactor. 90-95% of your code should be fine. The version your CMS is may affect the complexity of your conversion. Most major CMS’s will handle PHP 7 right out of the box in their most recent versions.

By upgrading to a version of PHP 7, you will see a variety of performance improvements; the most dramatic being speed. The engine behind PHP, Zend Technologies, ran performance tests on a variety of PHP applications to compare the performance of PHP 7 vs PHP 5.6. These tests compared requests per second across the two versions. This relates to the speed at which code is executed, and how fast queries to the database and server are returned. These tests showed that PHP 7 runs twice as fast and you will see additional improvements in memory consumption.

How Can Mobomo Help?

Mobomo’s team is highly experienced, not only in assisting with your conversion, but with the review of your code to ensure your environment is PHP 7 ready.  Our team of experts will review your code and uncover the exact amount of code that needs to be converted. There are a good number of factors that could come into play and affect your timeline. The more customizations and smaller plugins that your site contains, the more complex your code review and your eventual conversion could be. Overall, depending on the complexity of the code, your timeline could vary but this would take a maximum of 3 weeks.