If the Apple iPad’s form factor isn’t exactly what you’re looking for, a couple of companies, TwelveSouth and ClamCase, are trying to improve the user experience by offering accessories that physically change how you use the iPad. 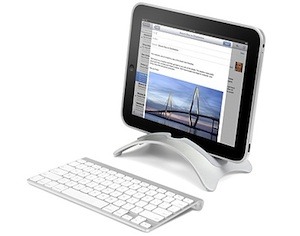 TwelveSouth offers an iPad version of their BookArc for MacBook. BookArc for iPad is rugged, arc-shaped stand that holds an iPad upright for easy viewing. If you pair the BookArc ($39.99) with a Bluetooth keyboard — such as the one from Apple, shown in the picture — the result is like having a mini iMac, but with touchscreen ability. The BookArc will also work with the iPad case from Apple.

The ClamCase is quite different. It takes what looks like the iPad case that Apple offers — which is actually pretty nice; I have one — and goes it one better by including a built-in Bluetooth keyboard, essentially turning it into a mini-laptop or netbook. What’s more, the case flips over, can be stood upright, and can be set on angle similar to what the Apple iPad case offers. See the pictures below for a better understanding. 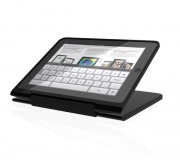 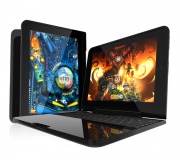 Of course, neither solution can use a Bluetooth mouse (believe me, I’ve tried on my iPad), so I’m guessing that they are better used for either typing in information or longer viewing of content such as videos. The BookArc is already available, but the ClamCase is coming Fall 2010. No pricing on the ClamCase yet.

Now, as much I love my iPad, the cynic in me thinks the BookArc makes sense but unless the Clamcase is relatively inexpensive, why would you just get a netbook computer? The current generation of iPad lacks many of the features netbooks have as standard, including USB ports. However, if you’ve used an iPad and understand what’s so brilliant about it, then you’ll know how it also offers features that netbooks just don’t have, namely a touchscreen and supporting applications. I’m inclined to think that both of these accessories can be valuable in the right situations. However, holding an iPad in your hand and taking full advantage of the touchscreen features is one of its highlights, and any sort of accessory is going to detract from that.